Alright boys and girls, buckle up and prepare to ride the struggle of my last 48 hours.

In my fruitless quest to tackle the apparently incredibly difficult task of trying to get particles (tire marks and smoke/dust) that behave properly I’m left without even a glimmer of hope.

I’ve got a line trace being called every timeline loop (since I don’t like event ticks) that traces the centre of the wheel to the surface, and gets the surface type. Cool, my car now knows what surface it’s on. What I can’t figure out is how to trigger the proper particle effects for those surfaces. I can easily spawn an emitter at location to get the dust when it’s on gravel/grass/dirt etc. But an accompanying sound sounds like a gtx driver crashing when it’s added in, obviously because it’s being played every loop.

I’ve tried a doOnce, but there seems to be no reliable way of resetting it when the surface, or speed condition changes. (since both speed and surface type are being checked constantly)

Now as far as wheel slip I’ve got that covered, thanks to no solid blueprint solution (thanks epic) I had to do a bit of math to figure out the correct speed for each each gear blah blah blah and end up with a bool (slipping, or not slipping)

It poses another problem, since just because the vehicle is on pavement, doesn’t mean it’s slipping. A branch doesn’t seem to get the correct value reliably enough to go through multiple condition checks.

So here’s the breakdown so far.

first the line trace gets the surface.
that goes to a select node, and gets the correct particle template and sound for the surface.
and that sends that information to the emitter, and audio component on the vehicle.
it then checks the speed, if it’s greater than 10 mph, and on grass then fire away (since my dust/offroad sound will be used)
if greater than 10mph and on pavement also fire away (no emitter, but tire rolling sound will be used)
if the math checks out and OH NO the vehicle is slipping bypass the other conditions, and use tire smoke/tire screech instead of tires rolling

am I on the right track here?

To me, this should be easy since if I’d ever played a car game without any tire smoke or anything I’d return it. It’s a basic part.

So I’m asking for suggestions, what have you guys found as a viable solution for vehicle particle effects in blueprints?

For smoke, did you looked at this tutorial? UE4 RayCast Vehicle Tutorial | Wheel Particles - YouTube

I’ll give that a shot, thanks!

Is there a simpler method for a simple Niagara particle effect initiated when the throttle is activated? Brace yourselves, obviously this didn’t work: 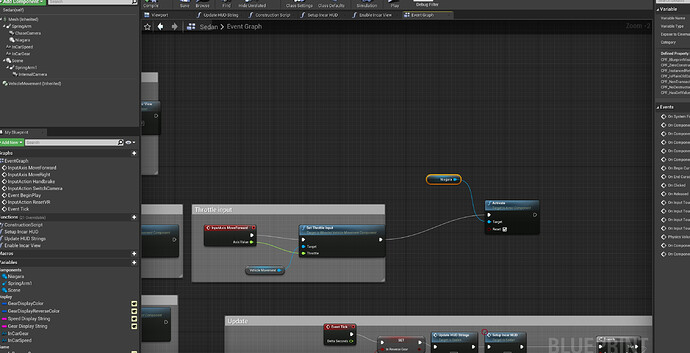