I followed the Epic tutorial here and had it successfully create a conveyor belt (very cool actually) and then added the box spawner at the end.

What changes do I need to make to have the expected behavior above become a reality? Do I need to adjust the physics behavior of the boxes being spawned?

Thanks for any help you can provide! 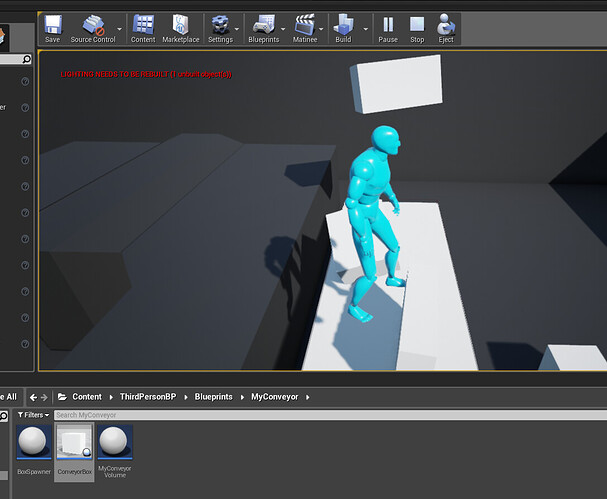 Increase the height of your “conveyor” volume so that it includes the player in it too and he will continue to move along on top of the box at the same speed.

Increase the height of your “conveyor” volume so that it includes the player in it too and he will continue to move along on top of the box at the same speed.

I am totally agree with this and second which i like to suggest you should decrease the speed volume. I am sure it will help you in the position as you want.

OMG I can’t believe this. I needed this exact video this weekend related to conveyor belt guide. I was trying to create a volume that alerts all actors in it if a “loud” weapon has been fired. I managed to get it to work using pretty much everything shown here, but it would have saved me a lot of time.

I did do one thing different than you did though with the volume itself. I attach the volume to the BP point of origin and use a public bounds vector with the show 3d widget checked. The volume is scaled automatically between the point of origin and the bounds vector location. It makes it a lot easier to use in my opinion. Also I did exactly what you said. I used a material bilboard placed at the center of the volume to indicate that its an alarm volume.

I still can’t believe this came out literally 1-2 days after I could have used it.