Hello.
I’m currently working on small dragon game and stuck with several small problems with movement controller of my dragon character. I made a Character BP based on 3rd person tutorials provided by UE developes and basically it suited ok, but some of movements works pretty strange. Here’s an example of my Character Blueprint: 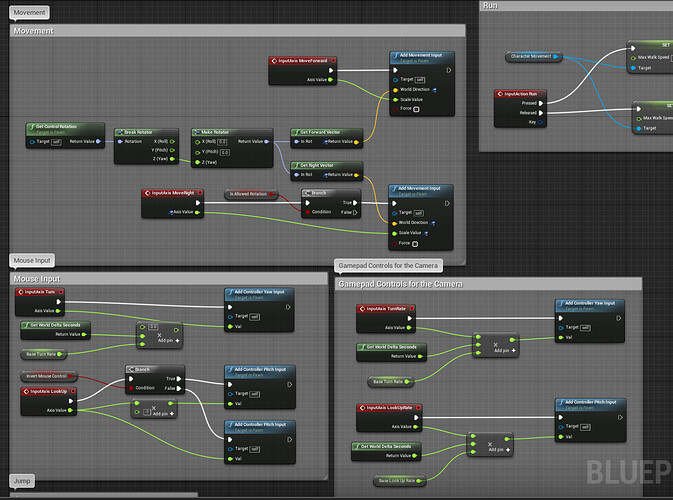 When I press left or right, the character rotates on the one place, which is not suitable and looks odd, the same thing if I press backward an it rotates on the place too. Also similar thing is happening when you run, and, by using the mouse, indicating the direction of movement. I recorded the video to show the problem: Dropbox - bandicam 2017-08-21 20-39-15-140.mp4 - Simplify your life
I couldn’t find any tutorials or samples with animal like movements, so I was looking on games and found pretty good realization of movements in GTA V when you switch to animal skin.
There when you press left/right, the character slowly goes forward, then starts arc rotation, turning its body smoothly, and when you press down, it slowly goes forward, then arc rotation and only then it turns its body backward.
Also the running movements were made better, when you move the mouse, it runs in an arc, but does not turn around. (I recorded demo video too: Dropbox - bandicam 2017-08-21 20-43-12-308.mp4 - Simplify your life )
So here’s a question, how I should change my project to make the control similar to that?