Question about creating floating text above a characters head

I was wondering how to create floating text above a character’s head, so it looks like one is asking ‘which number’ for something, and the 7 characters to respond with identical responses of 2, and the other character with a different response of 1. I’d like to try this in the sequencer.

It is probably incredibly simple, I literally want the following to appear as text above their heads for a few seconds and then disappear

It is probably incredibly simple

You can make it complex but the easiest way would be through a text render component attached to the character and offset a bit in Z: 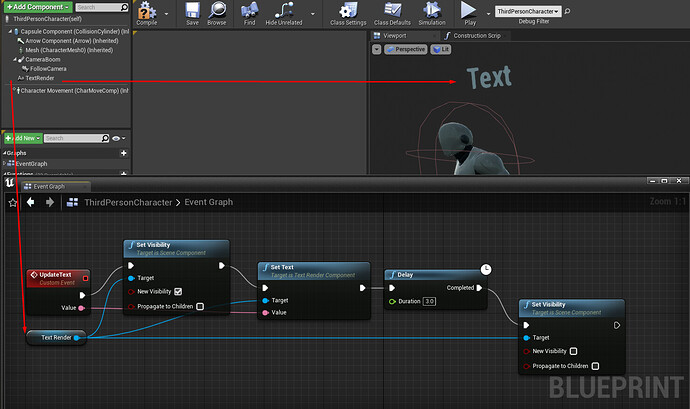 You can make it complex

Guide to placing 3D Text in Unreal Editor, and using it to create motion graphics.

I needed something better.
I started around a month ago baking letter meshes.
Doesn’t take horribly long (assume very advanced blender modeling experience) But after the whole uppercase alphabet you can probably throw up.
It’s time consuming that’s all.

As far as the system being “complex”.
Well, it literally takes a string, breaks down by character, and picks the matching mesh by file name. So no. not very complex.
But it can work at runtime…

But after the whole uppercase alphabet you can probably throw up.

I made a letter-by-letter 3d text that can bend around splines but can’t find it anymore. Typical AH.

But I did not go as far as making character models Åæø, not that dedicated. Must have used text render components + some material trickery.

I forgot to mention!!! It’s an AI character that can just be stood still, it isn’t the player character.

what is the ‘update text’ custom event?

It’s an event you create yourself - hence the ‘custom’. You can call it to update the text in case the NPC needs more than one line of text. Even if it’s just a single line, it’s handy to have it as you may want to reuse it to show / hide text.

What is it about 2d widget text (with “Space” set to “Screen”) that is insufficient?

What is it about 2d widget text (with “Space” set to “Screen”) that is insufficient?

Who says it’s insufficient? OP was given options, this is the first one mentioned on my list… Besides, that wouldn’t be 2d Widget, that’d be Widget Component + Widget.

You can do it with just a normal widget but then you must update the coordinates every frame unless it’s a static screen, ofc.

Hi, sorry to bother you. I just wondered what nodes you put in the custom event?

There are no nodes inside. Custom Event is a node.

Custom user-created events that can be fired off from within a Graph.