I am curious about blend shapes. I am making a game where the character can change clothes… therefore overall geometry will change depending on version of character. I dont want to remake blendshapes 100x over for each outfit for a characters face. Do blendshapes function if i were to somehow just use the head or face geometry duplicated for a blendshape of that area and delete the rest? or must it be a duplicate of the entire mesh exact copy…

Whats the best way to handle a characters blendshapes otherwise if they change clothes but still need facial blend shapes on all outfits?

you should look into making a modular character, where you can switch out parts of your character for others. Here’s an example from GOW3 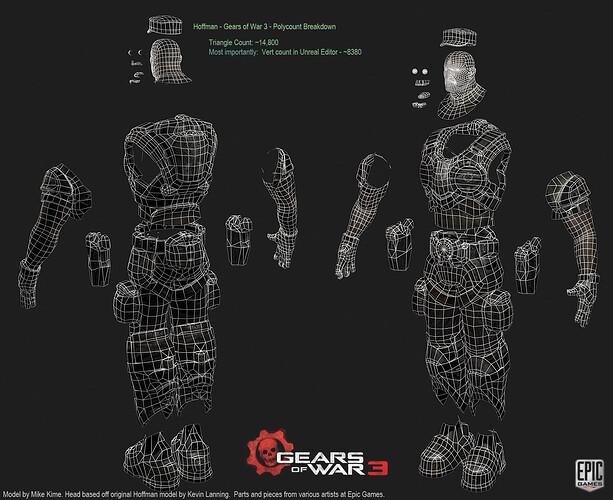 problem is theres a a version of my character that is wearing shorts… chest ,arms, legs and head are all on teh same material… If the characters chest is exposed… it has to be connected to the neck line or else you get a seem. Some outfits have different levels of skin showing… not all end at the neckline. So im curious how i can share blend shapes between a version that ends at the neckline… and a version that ends at the waste line.

I don’t know how wild of a blendshape you’re thinking of, but if you’re only using them for facial features/animation, then you don’t need to worry. Basic vector normals will hide your seams without an issue, no matter where they are… So long as you’re not blending where the cut is. However, if you’re doing something such as making a skinny guy fat, then you will definitely get a seam.

One of the biggest issues in doing a modular system with blendshapes that alter the body is that the UE blendshapes don’t have vector normals. If they did, then there wouldn’t be a problem. We could modify the vector normals for the blends and no one would be the wiser. As it stands, you basically have two choices: Live with the seams, and do your best to hide them when the blendshapes are applied, or expand your skin mesh to include every area visible for all outfits.

TL;DR: Blends for the face are fine with a modular system, so long as you don’t cut the model along an area that is being modified.

im not following… your saying if i disconnect the neck from the torso… and generate a normal map with the verts unattached on the low res, but attached on the high res… there wont be a visible seem between the head model and the toroso model? Since its seperated i assume there would be one.

Close, but no. Vertexs have their own normal system, called vector normals. This is the points on the object telling the polygon which direction they should go. It doesn’t change the shape of the mesh, but it will change the look of the edge of the model, making two separate objects look like a single object when placed together. No texture maps required. It’s all in the model. Example; In Maya, when you smooth an object, you’re changing the vector normals to represent a smooth object. When you use the Set To Face normal tool, the Vector normals are told to stand straight out, giving you that low-poly, segmented look. These are Vector Normals at work.

Now, in Maya, you can easily copy the vector normals of your complete body onto separated parts by using the Transfer Attributes tool. Make sure to open the options and double check that Vector Normals are selected to transfer. (I am unaware of how to do this in other software, but there are probably semi-easy ways to do it.) Once you’ve exported the file and imported it into Unreal, you shouldn’t see any seams.

Below is one of my models that have been cut up, but the vector normals were copied from the complete model, so when the models are together, they appear as a single model. Note: On the bottom image, body-changing blends are applied, which is what is causing the seams to appear. This is why I was saying don’t cut along areas that are being morphed. When/If Blend Normals are added to Unreal, this issue will disappear.

Interesting, I have never heard of that. I’ll give it a try. Thanks.

I have a question. Would this work for models with different materials for heads or different material instances like diffeerent textures but generalyl keeping the normals and texture similiar around the neck line so that it is seemless? What im asking is if a seem will become apparent anyway if there are seperate materials for the head and for the body…

I know with unity3d there would definently be a seem if its not all on the same material and texture map. As in with unity it will cut up the model wheneever a new material is used on those polygons.