Q:How to make a UI Widget/UMG Button switch view target from one camera to another?

I am making a game with blueprints and I am want to make it switch to different cameras when I click buttons on my widgets. When the game starts a widget appears on the screen, I click a button on it, it is replaced with another widget then when i click a button on the second widget It should be changing the view target to the next camera but I don’t know how to make it work. I can’t create a reference to the camera actor in the widget event graph. So this is what I have in the widget blueprint event graph: 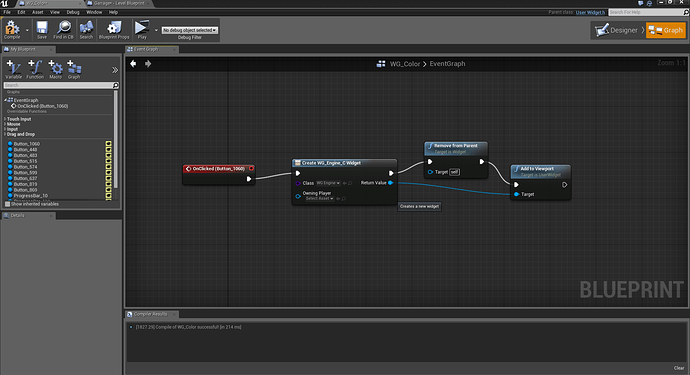 2015-07-31_11-25-57.png1920×1045 192 KB
It replaces the second widget with another one but I wanna make it change to the next camera as well.
I tried copying the OnClicked(Button_1060), which is the button on the second widget to change
the widget to the third one and switch to the second camera, to the Level Blueprint like this:

I know the thread is super old but people often stumble across this, so incase anyone is having a similar issue and cant find an answer -

If you want to reference that specific camera:

Now if you want to get this camera reference in any widget,
simply make the ‘Cast To GameMode’ node and you should have access to that Camera Reference.

Hope this helps anyone still searching around!

Thanks for answering this!

This is exactly what I need but the jpegs with the graphs are broken?!