ProRes missing, but it's enabled

I’ve personally never encountered this. Have you tried creating a new project as a test and confirming it shows up?

EDIT: I see in the documentation ProRes/DnXHD is not available in Movie Render Queue just yet. That’s fine, but it’s not in the default Movie Render window either.

Three months in, 4.26.2 and still no Apple ProRes on Apple MacOS.

I read somewhere that the apple and DNxHD codecs are not available for Mac.
I am on Mac and have the same problem.

Anyone get an answer to the missing ProRes? Seems odd there is a plugin but the render settings don’t have the ProRes option.

I’ve been having the same problem. I have found a workaround tough, even if it is longer than having the video ready just after the rendering process has finished.
I did this:

-These are my export settings 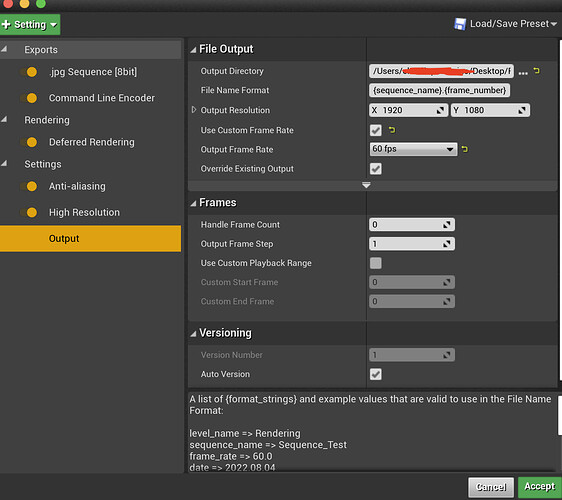 -As you see I use the Command Line Encoder, and I have ffmpeg installed to have it work correctly (look here for more information Export Formats | Unreal Engine Documentation).

P.S: Also the cool stuff is that, if you need to change something and render again and you have selected the same directory of your previous rendered images, then Unreal will automatically overwrite the old images with the new render and woila, in Davinci Resolve the imported images will update automatically with the new ones.

These are the Command Line Encoder Settings if you need to copy paste them:

I know its been 7 months since the first post, but does anyone know if they have corrected this yet? Ive reached out to the team about it but they just run me in circles. Still doesn’t work for me on 5.0.3