I have created a C++ class derived from UUserDefinedStruct to be used in the Editor. When I add a variable of that type in another class and recompile, I can only enter as a default an asset and I cannot edit each variable of the class individually.

The header file code (without the includes): 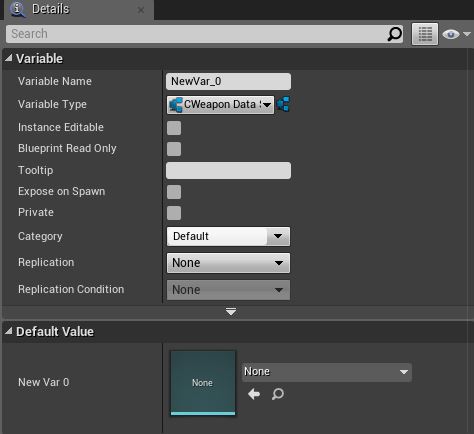 Is there some class specifier I am missing maybe? Or it is not possible for that kind of class to have its variables edited in the Editor?

Doesn’t make much sense to create a subclass of UUserDefinedStruct, that class is used with a lot of details panel customization code set to draw only the values defined by what the Editor extracts from reflection.
Even though your FString Name is there the Editor just doesn’t know what to do with it.

I want to use the C++ struct in multiple classes. Adding an include of its header file to the header file of the classes I want to use it in results in “Not found message”. But that is another issue I am having and that is why I tried with a class created from the UE4 Editor.

Hey there, why create a UUserDefinedStruct when you can use normal structs?

Then you should solve that and use c++ structs for what you need, instead of doing UUserDefinedStruct.