I’m currently experimenting with the ProjectLauncher and figuring out how to use the release building works using versioning as well as the patching and DLC implementation.
However I seem to be running into issues left and right.
The workflow I’m using is the one described on the following page: Releasing Your Project | Unreal Engine Documentation

As I’m just experimenting with the feature I’m working in a completely new blank code project running on 4.14.1 downloaded via the launcher. I saved the startscene as a new MainScene and made that my main startup scene.

Following the example and attempting to build the project as is with only the main scene included I ran into a first error complaining about “Only staged builds can be paked”. Adding the the -stage command resolved this and then everything cooked, packages and so forth. The releases folder is created and in the saved folder I can find the stage builds.

However I do get an error message during the build process: “Program.Main:ERROR: AutomationTool terminated with exception: AutomationTool.AutomationException: Failed to find command Release”.
I’m not sure if that has any implications as I did end up with an executable but still it’s an error.
Any ideas what I might be missing here?

And here are my launcher settings, based on the example page: 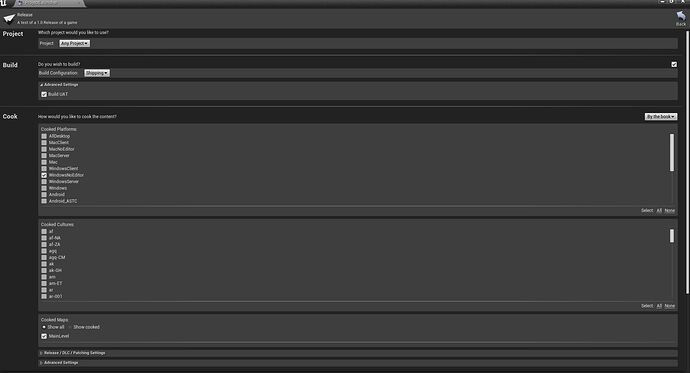 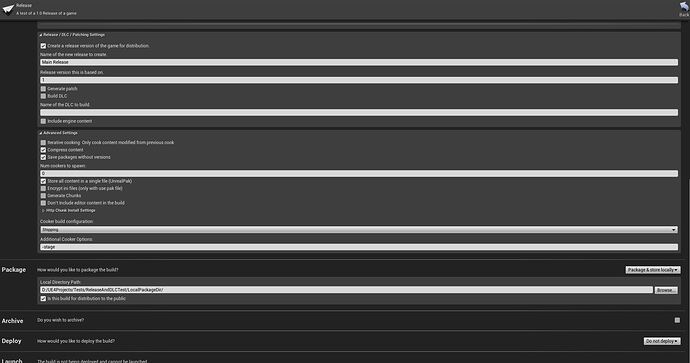 Thanks for the help and happy holidays!

try… take out “1” in “Release version this is based on” section. That section is for patching.
Don’t add -stage for release one.

This worked for me. Thanks!

I have the same issue, it is caused by Name of the new release to create. You choose “Main Release” as a name, there should not be space in it.

But if you have no number in versions u cant create a patch ?

I found this answer, late! Found the fix on my own but would have been helpful to come across this, sooner. This is my answer to a duplicate question: