I have the following Blueprint setup: 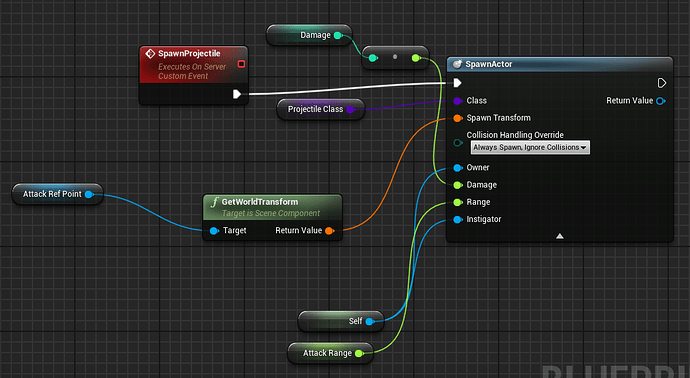 the problem is, it spawns the projectile in front of the character, wherever they’re facing. I know this isn’t just in the wrong location, because here:

You can see that the red arrow (the visualization of the Attack_RefPoint) is pointing nowhere near the character’s front. yet that’s still where the projectile spawns. (And it looks like it doesn’t move away at any point.) The projectile is also supposed to point in the RefPoint’s direction, which it clearly does not.

Does anyone know how to fix this or have any ideas? Thank you so much!

It looks ok. Is the projectile setup correctly? Have you tried it with the tennis ball?

Yeah, it is. But I have to figure it out to make any kind of multiplayer game.

(I know the blueprint spawning it is correct, but all I’ve changed since it worked correctly is the replication of the event (so that other players could see it). That’s why it’s so frustrating.)

Ah, replication. Don’t know about that I’m afraid, but it always sounds like a pain in the but…