Project Culverin is an FPS in which the player takes the shoes of a vigilante determined to rid his community of insidious crime organizations. It’s based on the Epic ShooterGame template, but it has a good number of additional features to it’s name. This includes Equipment Modules, Dialogue, Questing (with support for objective items), and menus for each. The quickest and easiest way to describe the game is if you mixed Deus Ex, Crackdown, 80’s sci-fi camp, and a bit of Japanese art influences.

The game is largely designed around the philosophy that an ideal deal game is more of a past-time rather than a temporary experience. Thus, missions have a good deal of procedural randomization built in (at the moment this is mainly just randomizing where enemies spawn) to prevent trail-and-error gameplay and reduce the boredom of replaying a mission if you die in the middle of it. Additionally, there are multiple ways to complete the missions’ main objectives. They often center around items (destroy a certain number of drug crates for instance), but there are many ways to go about the mission itself since the enemies are never the objective. This means the player can be stealthy, peaceful, or violent and still be able to complete the mission. Also, the amount the player is paid at the end of the mission is determined by how many objective items were dealt with, whether there were any civilian casualties, and for any miscellaneous bonuses the mission may provide. Your playstyle impacts what becomes available to you throughout the course of the game: if you are largely peaceful, you will find yourself negotiating with bosses rather than killing them and possibly being able to enlist them as allies. Conversely, if you are violent you will tend to be presented with violent situations.

A public digital prototype will be available on Dec 29th.

I’ll have some screenies and a video up by then, probably sooner. I can answer any questions and elaborate further here in this thread for those who are curious. You can find out more about the game at ProjectCulverin.wordpress.com

The following screenshots represent a work in progress - the game is still in digital prototyping. There will be all kinds of broken LODs, HUD issues, Non-textured items, etc.

This is the quest briefing: Gives the title, description, and rewards of a certain mission. Pressing the interact button on the NPC starts the mission. 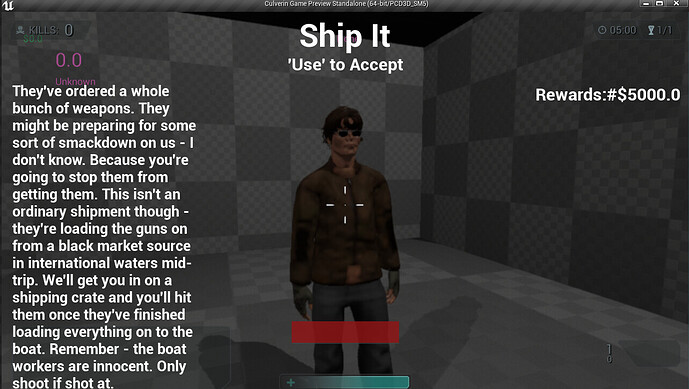 This here is the struct-based dialogue system I’ve been cranking away at: 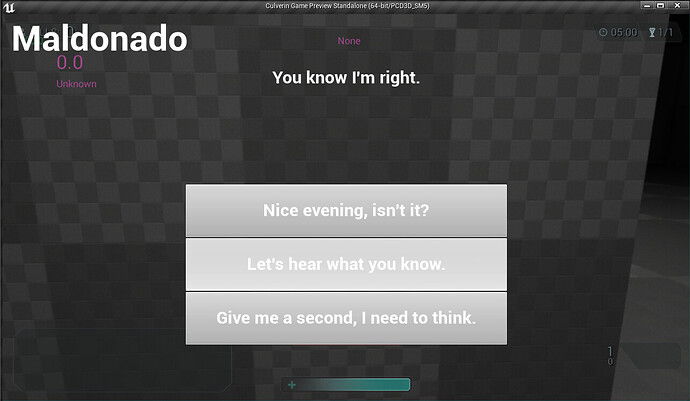 wanted to see some pictures at least XD

wanted to see some pictures at least XD

Yeah, I figured people would want that, no one likes reading word walls. I’m on it - The game is pretty ugly atm, and people won’t really know what they’re looking at unless it’s explained to them since it’s still in the prototype stage. But I’ll put some up! I know this thread will rightfully die if I don’t, I don’t like seeing threads without pictures either!

A pre-alpha build of the game is available at
https://drive.google.com/file/d/0B9JlgjClG48zUzFhd2RsY2NsTEE/view?usp=sharing

Known issues:
The cursor sometimes is visible and movable while you are in gameplay when the game first boots up. Entering a menu will hide it again once you leave the menu.
Certain objects don’t have textures
Civilians are blue mannequins
Music will sometimes overlap with other tracks on respawn
Leaving the pause menu will not return control to the game. Press quit and restart the game if this happens.
The hireling in the base has the same model as your boss.
The elevator is a large rectangle.
Modules don’t always get assigned to their slots correctly.
It’s easy to fly out of the various maps using a certain module
The effects on the frag grenades don’t work right.
If you don’t have enough money, the hireling will still talk to you like you do.