First I would like to introduce myself, my name is Ali, I’m mew here and new to Unreal engine 4 , unreal engine in general, and any game engine what so ever, in fact I’m fairly new to game development as well.

I started self learning Unreal engine 4 less than 2 months ago, mainly learning about Blueprint scripting cause I have no programming knowledge whatsoever, only have some modelling experience.

So enough of the boring stuff, lets get to my project, which is my first game project ever (More of a concept demo than a full game). 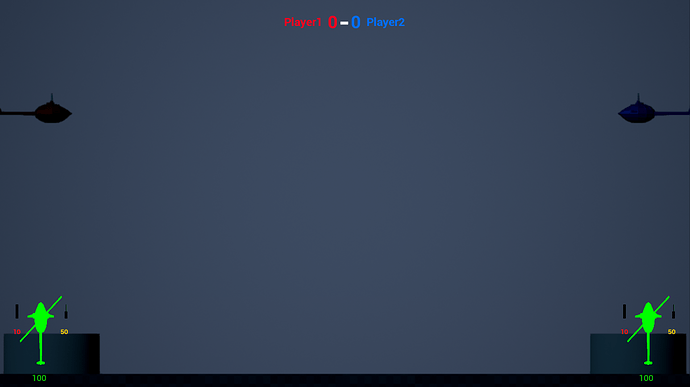 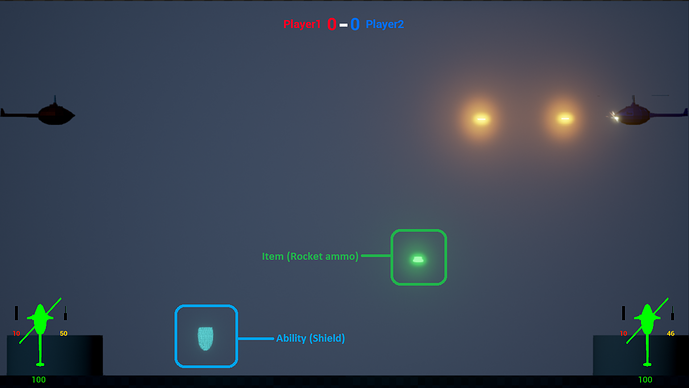 1- Two players local multiplayer game (single screen multiplayer)
2- Side view camera, with small arenas to fight in
3- Game is score based (the player who scores more wins), with random items/abilities spawn.
4- Can land at base to refill ammo and regain health

Features implemented in this demo:

1- Demo arena that is very basic (just a flat un-textured ground, with basic geometry as players’ bases, and basic mesh for the choppers, items I created quickly in Blender for demo purposes).

2- The arena is limited by an invisible wall for now.

3- Weapons include: Rockets and machine guns

5- Items/Abilities drop system that spawns random items/abilities at random places in the arena at random intervals.

6- Players bases: each player can only land the corresponding base to refill ammo/regain health gradually, however the player can’t move till the process is done making him vulnerable for attacks.

9- The first player to win 3 rounds is victorious.

1- Rocket ammo count is 1 less than it should.

2- Sometimes an item can’t be picked! (Rare behavior though).

3- Shield pickup might still have some bugs related to pickup behavior for player 2.

4- After victory , when return to main menu pressed it takes you back to title screen but press any key does nothing.

6- When choosing the options menu the main menu doesn’t disappear (although it worked as intended most of the time -encountered the issue sometimes only- in the editor before packaging).

1- Multiple different arenas to choose from with each has a different style and special properties (like different time of the day, different weather, destructible object, lighting strikes, and ground AI controlled units are among some of the ideas at the moment).

4- CO-OP Mode with linear levels and enemy AIs to fight against (if I can figure out how to do functional AI).

Right no I’m having problems with the camera perspective (distorted peripheries), so I switched to orthographic view for now, but I want to get a sensation of depth in my levels that can’t be done in orthographic view, any help in this area is appreciated.

My other issues is when I try to get back to the main menu after the game ends, I call my main menu level (I have my main menu as a separate level), but somehow when the menu shows the controls doesn’t work, it just sits there.

The purpose of this demo to get impressions/ideas and get help familarize myself with the engine even more.

Note: Every thing in this demo is just a place holder.
Note: I know the controls for the choppers sucks

I appreciate if anybody would download this first trial of mine and give me opinions/feedback/ideas/help.

Looking forward for your comments

For just learning UE4 you done a very good job.

I’ve played the game and there a few remarks.
When you finish the game and you want to replay it, NO controller input gets detected at all. Not from gamepad nor keyboard(where your flash the" press any key to start")
Also in the main menu screen you cant use the controller, which is weird because you play the game with a controller

Sometimes the menu bug out, so you get on menu over another.

Gameplay wise i think you done a solid job for a starting game.
Helicopters do feel a bit sluggish, if it’s a fast pace game i would want a bit more direct feel in the choppers.
The pickups are a bit weird non of them worked for me or atleast if it worked i didn’t notice. Maybe add some visual feedback like you did when you hit the opposing chopper.

I know I noted stuff you already said that are buggy but those things need to be patched out asap!
Rather work on one element untill that is like 100% then doing all the elements at various finishing stages.

Thanks for your feedback , it means a lot.

I noticed some of the bugs you mentioned and working on fixes at the moment.

However there are things that I still can’t seem to know what is wrong with it , the bug you mentioned where pressing Back to Main menu doesn’t detect Any controller , What do you think is the cause? The way I’m calling my title menu back is by having my title menu/Main menu in a seperate level than my gameplay level , and when back to main menu button is clicked I use open level node and use the name of the main menu level which have a default game mode with the player controller, so what is missing??

The menu overlapping bug annoy me cause it seems to happen randomly and when I Last check and played the game in the editor it didn’t happen, so I Don’t know what’s wrong with that, may be make a seperate widget for the options menu , instead of making the options menu a canvas panel in the main menu widget??

As for the controls I know it is sluggish and still trying to make improvements once I’m done with bugs squashing , I originally aimed for a momentum based movement when have a bit of acceleration and deceleration to the movement to give a feeling of weight to the chopper, may be I have over done it.

The pick ups should work fine as far as my tests go, just you need to note that you can’t pick ammo when your ammo is already full , same goes for health , you only can pick health when your health is below 100, and you can’t pick the shield when you have already picked it before and haven’t used it yet.

I detected another bug with player One base in which you yet stuck it your health is below 100 but I have fixed it now.

Also I didn’t know how to controll the menu using the controller , I used Button pressed event instead of clicked but nothing happened.

Thanks again, hope to hear more from you and may be you can’t point me in the right direction to fix some of the bugs.