In many ways, profiling a project that uses stereo rendering is the same as profiling any real-time rendering project, but there are a few areas that require special attention.

In general, the first step is to use the stat unit console command to see what thread has the highest number:

As always, when profiling, it’s important to profile a “Test” build configuration. This is the closest option for performance that is representative of the final shipping version of the project, but that still has some limited debugging and profiling capabilities.

When trying to profile the GPU, VSync is often problematic and should always be disabled. It can insert wait time in arbitrary places and can often be misleading when looking to see where the slowest code is. It also means that missing the target frame time by a small amount will cause the frame rate to be cut in half, to ensure there is no vertical tearing. This is often misinterpreted as a huge performance issue, when in reality it was a tiny change that pushed the frame rate over the VSync cliff, and is probably easily addressable with some profiling and targeted project-side optimizations.

Head-mounted display systems that utilize stereo rendering generally have a compositor. The compositor takes the final frame rendered by the application (in this case Unreal Engine) and applies a distortion opposite to that of the optical lenses in the headset to make the image look correct. The compositor optionally can do some additional work to smooth over frame hitches or low frame rates by inserting interpolated frames as well as other tasks.

These tasks take time. It is not uncommon for a compositor to take up to 1 millisecond to do this work, which means there is one less millisecond per frame for an application to use. This must be taken into account when budgeting frame time for a project. As always, average frame time should be lower than 1 second divided by the number of frames (minus 1 for the compositor), to account for occasional hitches. Alternatively, dynamic resolution can be used to scale resolution down to meet frame time budgets in heavy scenes, or up to use the full GPU time when available.

VSync is forced on by the compositor

The issues mentioned above around VSync are true for non-stereo rendering as well, but with stereo rendering these issues are exacerbated by higher resolution and rendering once for each eye. Furthermore, most compositors force VSync to always be on. This means that there is no way to be sure GPU timings in the headset are accurate. The solution for this in Unreal Engine: launch with the -emulatestereo command line parameter to perform stereo rendering to the monitor screen without involving the compositor, allowing VSync to be disabled.

While not strictly a performance problem, latency is very important for a comfortable XR experience.

A simple pipeline would just sequentially simulate the current frame and then render it. 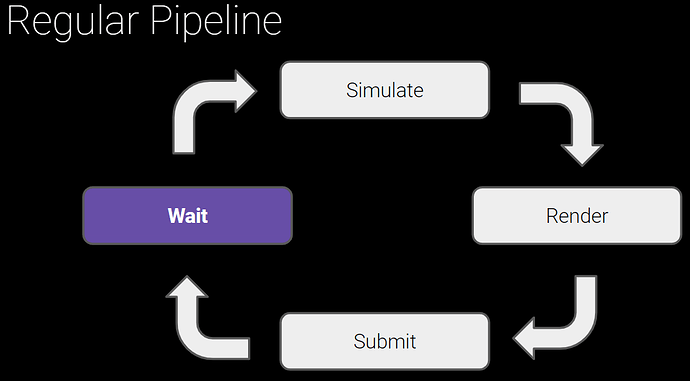 Though in that simple method, because rendering waits for the simulation to complete, we have a pretty tight budget since we need to do everything in 11ms.

Instead, we can let the simulation run slightly ahead of rendering. In Unreal, this is running on the “Game Thread”. The wait happens on that game thread, before the next frame’s simulation. The rendering and submit happen on a seperate thread (the “Render Thread”).

But if we naively query the post at the beginning of the simulation and use that same pose for rendering, the head-mounted display can feel “laggy” or slow, because now there’s potentially two frames of time between querying the device position, and displaying the resulting frame.

This can be resolved simply by querying the pose again before rendering, and using that updated pose for calculating transforms for rendering.

There are a few booleans for controlling this behavior. The camera being used for the HMD view in your scene needs to have “Lock to HMD” enabled. Disabling this will disable late update and increase latency. Motion controllers also have a “late update” checkbox. If the application feels like it is not as responsive as desired despite hitting target frame rate, it would be worth checking to make sure these late update flags are enabled.

In addition to VSync, there are other considerations for stereo rendering head-mounted displays that make consistent timing even more important, and that make it extra susceptible to hitches. The rendering is highly dependent on accurate, timely tracking information for the movement of the head-mounted display and any other tracked devices like motion controllers (to a lesser degree). Because polling the tracking positional data for the HMD and rendering the frame based on that positional data need to happen in quick succession, if the rendering thread falls too far behind the game thread that is polling the positional data, the game thread will wait for the rendering thread to catch up. This means that if the scene is GPU intensive, it can even cause the CPU to wait as well. Sometimes this can be misinterpreted as logic on the CPU being slow (in a similar way to how VSync can sometimes be misinterpreted as GPU logic being slow).

Additionally, because of the timing interdependency of the GPU on the CPU and vice versa, and because the CPU may be working on the next frame while the GPU is rendering the last, a slow down on one frame may cause a cascade of waits that can take multiple frames to recover from, so it can be hard to track down the cause of frame 3 slowing down when it started with a slowdown on frame 1, etc.

A few of the images embedded in the article are from udn.unrealengine.com and show up as “Image not available” errors.

Indeed, I’m seeing the same thing. I could swear that wasn’t the case when I looked at them yesterday… I’m investigating

Edit: It has been resolved. Thanks for the note @Rectus_SA!