Hello,
I want to Save Some Actors with the Savegame Bluprint but there are some Problems.

For this Test I made a PrintString for

Location -->dont know how to describe this ^^ 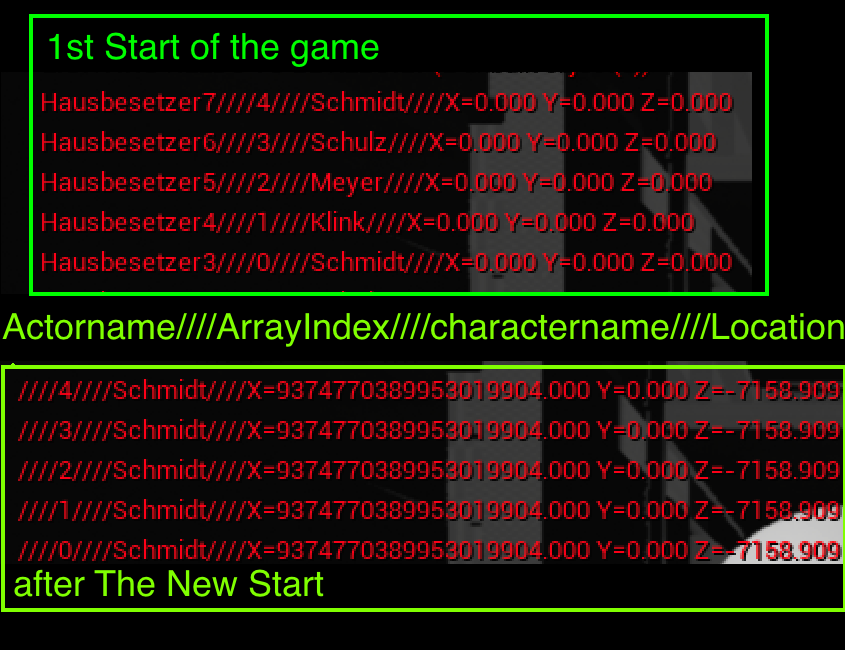 Hope one of you can help me to understand my mistake

Well, frankly, i think you got a bad case of messy code, i spot at least 2 array list variable used to store your character, and after adding your newly spawn character, those variable didn’t get reference again, which leading me to question why did you put them inside the SaveGame function? Based on the rule of thumb, complex code result in complex problem and kill tons of innocent neuron, and multi-task function is one of the main reason for complex code.

Also, can you show us how did you set up your save game blueprint?

I wanted to save all the changes in the game

I hope that helps a little bit to understand the problem

sorry for my bad English

If i remember correctly, you can’t store actor/ character in a save game, so i suggest you remove the character list from your struct either add variable to current struct/ create new struct to store your actor data. If you still got the problem, try to follow the tutorial, you may spot error in your code.

I wrote the blueprint over again . This time only the Actor class is saved .

But the problem is the same

when loading neither the actor nor the class is displayed

you could graphically represent this

I just observed something interesting

I ahbe the .sav file geköscht and started the game

then I have the closed program

then I have the game started again

and the .sav was only 200byte large

all seems to be anything overwritten .sav in the restart of the game

OK I think I got it

Not the way i want but the Result