Could you post your DXDiag for both machines? If the project is working for your colleague and you are still experiencing issues you may need to uninstall the engine and then reinstall it.

There is another thing to check before attempting a reinstall. Can you check the QUBEHUD.cpp file and make sure that the include for ‘SQUBEPauseMenu.h’ is referencing the correct location?

Here is the DXDiag for my Laptop running Windows 8 . I can upload the DXDiag from my work PC tomorrow .

It does not reference any location.

You may need to try uninstalling the engine and then reinstall it.

It does , but it changes when I copy it into here . The # symbol gets removed and the size of the text increases.

It seems as though there may be a problem with your install of the engine. Have you had the chance to try uninstalling and reinstalling yet?

I have tried both by verifying the install and by doing a clean install , but I get the same error .

I was referring to the second (#). It seems your include statements are correct.

I tried updating to 4.3 , but I still get the same error message .

Just to double check a previous question can you check that the file SQUBEPauseMenu.h is in the same folder as QUBEHUD.cpp?

I am able to switch engine version and generate project files successfully . Both files are in different locations , to begin with :

If I recompile I get the following error messages.

I get the same error if I move SQUBEPauseMenu.cpp to Source\QUBE\Private\Engine

I have attached an image of where each file is by default . I have tried moving files between each folders , but have not yet been able to successfully build the project . 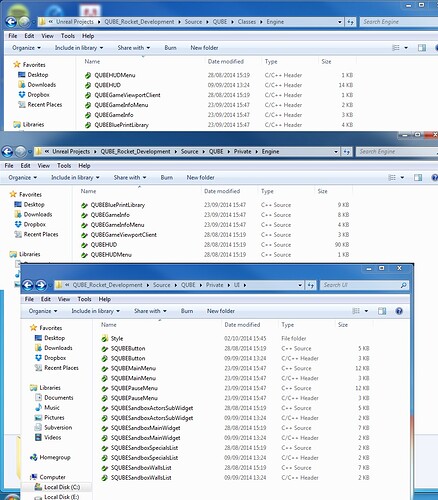 Could you create a new project and transfer a few files over at a time? This will help narrow down which files are working properly and which files are causing this compile error

I created a blank project called “TestProject” I was able to copy over all files apart from Config\Defualt Engine and the editor would load. There was no custom game mode , which is need to play the game properly .

When I copied over Default Engine it said there was a problem with game URL.
I copied over QUBE.uproject . I then generated project files , but was unable to recompile the source code.

I tired again with a blank project called QUBE . I was able to copy over everything apart from Config\DefaultEngine and the editor would load , but there would be no custom game mode .

When I copied over Config\DefaultEngine It did not ask me to generate project files or compile the source code , but the editor would crash if I tried to load it . The same thing happened after generating the project files.

I was able to successfully compile code in VS which I was not able to before . It does not say the the module needs to be recompiled or is out of date . When I load the editor it crashes .

Thank you for all of the information provided, I have entered a report into our database (TTP #348936) for further investigation.

In Config\Default Engine it is currently set to .

The editor will load , but custom game class is missing so none of the blueprints work if it is set to.

The editor will crash when loading if it is set to .