I’m fairly new in UE4 and hope I’m here in the correct forum for my problem;
I created a new project based on the thirdPersonGameMode-preset. I replaced the following camera by a static, fixed one and so far everything went fine.
Further I deleted the default third person character model and imported another one from Mixamo. I also created a Blueprint accordingly, adjusted the mesh, collision capsule etc…

I also attached my new BP to the project settings as the default player pawn and also in the ThirdPersonGameMode class defaults as player pawn.

Now to the problem:
I drag my character BP into the map and start the game in order to control this character. But this does not happen, instead a new character is created and controlled, while the one I dragged into the map is just an uncontrolled, static statue.

This is weird, because the third person default level works just like I intend it, but I can’t spot any difference in settings…

Can someone help me how I could fix that?

The difference in settings is probably that you haven’t set the new character BP to be automatically possessed by the player. Look for the “Auto Possess Player” option in the details panel of the character BP in the level. Set it to player 0. 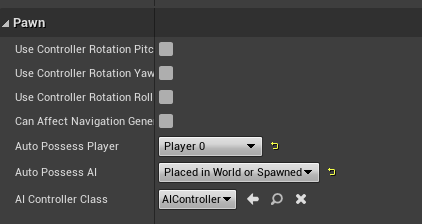 This was it! Thanks