Problem to reference objects of a certain Interface

I’m working in a ongoing project and trying to create a HUD that is able to spawn objects in real-time.
I don’t want to change the parent class for all the objects that they already have. Thus, I thought I could create an interface and just add that interface to the objects that I would like to be able to create.

So, I created an interface in c++ (which has nothing in it). Then, I created a struct that holds an object of that interface. And I added the interface to a test object, but I can’t see the object be listed in the struct when I search for it. 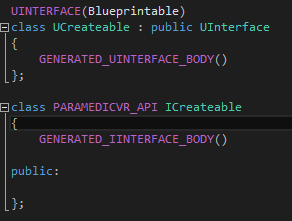 The objects in the struct I’m creating: