Port from UDK, but concerned about UE4 performance & min specs.

I have a game - http://homesick.luckypause.com/ In UDK, it’s running well 60+ fps even with almost a million polygons.

I’m looking into moving it to UE4 though for better console and VR support. However running just the template examples I’m only getting 20 fps! Even though my computer specs are quite good I think - GTX 550, i7, 48GB of ram.
My drivers and windows 7 are up to date, but maybe something is wrong with my machine somehow?

Right now my UDK game runs at 24 fps even on a intel HD 3000, which is playable for this kind of game. I realize UE4 might not be able to stoop that low, but I’d like to keep the min specs required as close to that as possible.
Please help!

I posted my dxdiag dump & and screenshot here: 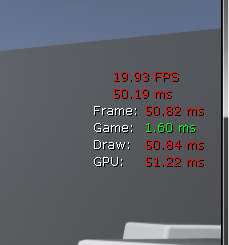 I get poor performance in the editor as well, but I thought maybe if I closed the editor and launched through the front end standalone maybe the performance would be ok. I’m guessing something must be wrong with my system somehow. Any help please?...

Oh sorry if this is off topic. But I just saw your video game just now. I like it. I love playing 3D puzzle adventure video games a lot.

I would recommend you to take a look at those threads: Search results for '' - Unreal Engine Forums There you can find some good information

Game looks great, but a MILLION Polygons, in levels like that? Time to fire your artist man

Game looks great, but a MILLION Polygons, in levels like that? Time to fire your artist man

I am the artist though! haha It’s actually about 650k polygons, and sure that’s a lot and I could reduce things a lot, but they aren’t pointless polygons, they are adding detail, like the edges of walls, the cabinets, etc. I wanted to get away from having those perfectly straight video-game edges and from my experience now days static mesh baked-lighting polygons are almost free, or at least they were with UE3 / UDK.

We’ll probably release it though something else, but even our steam release won’t have DRM - aka after you download it through steam you could close steam and never log in again and run the game directly from the exe. I think it’s a misconception that all steam games have DRM - the developers have the option to enable it or not.

I would recommend you to take a look at those threads: Search results for '' - Unreal Engine Forums There you can find some good information

Thanks so much, I think I saw most of these - they seem to mostly have to do with laptops, and a lot of them don’t look like they got resolved…
I guess what I’m trying to find out is:

1. is there something wrong with my i7, GTX550 computer causing it to only get 20 fps with the simple first person template? Or is the engine just that slow?

2. Moving from UDK to UE4, - keeping the quality about the same how much will I be raising the minimum specs of my game? Will it raise them from Intel HD3000 -> Intel HD4000 for about the same frame rate, or will it be a worse hit than that?

I’ll be trying to do some tests this weekend, I wish I had more computers to try though. Thanks!