Hello,
A short while ago, I did a quick search for speech recognition implementation within UE4.
Since I came up empty, I decided to port PocketSphinx into a plugin.
Note: I am not a game developer, nor do I regularly code in C++
This is a rough WIP, and any advice would be appreciated. 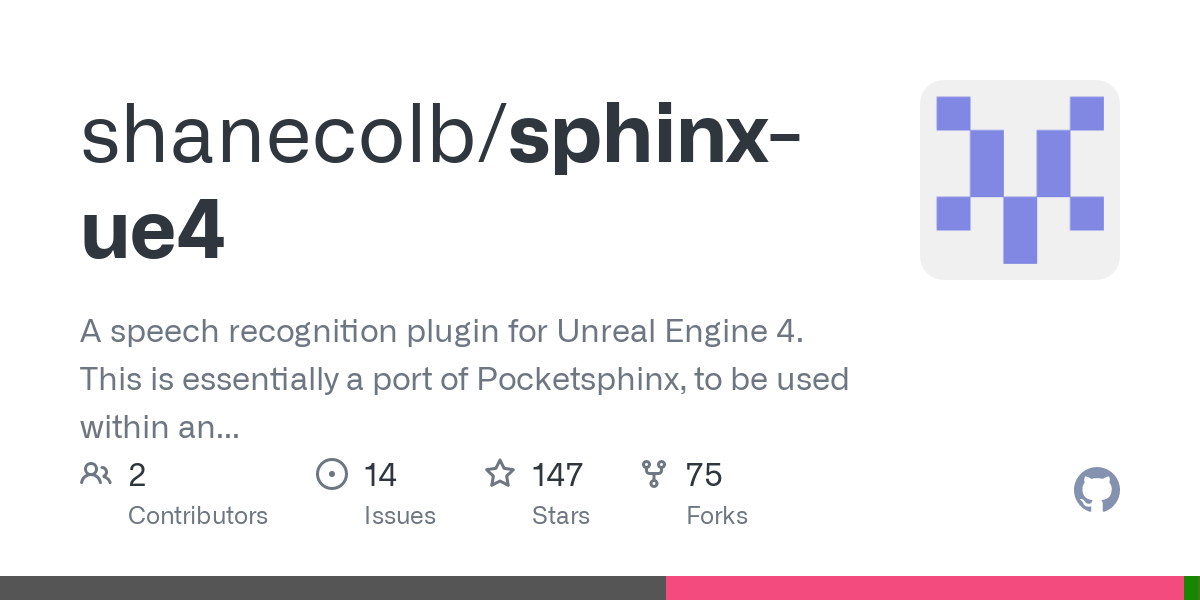 To make use of the plugin, try the following:

False positives do occur, eg. speaking triangle will trigger translate in my example.
This is more than suitable for my needs.
Any feedback is appreciated.

I haven’t had a chance to use this, but Great Work!
Now all I need is a Text to Speech plugin, and I’m done

hey i try to follow your step but this error occur

do you know what happend ?

@ShaneC - Awesome! I was going to do this myself for my VR game, but hadn’t got around to it due to implementing other things. Thanks so much

@s67Zero6 - It looks like some kind of loop. If you have the plugin source there try and put some breakpoints and see what’s happening in the actual plugin code (in Visual Studio).

The Github project should be public, let me know if it is not.
Rather than a few screenshots, i`ll add a link to the project file of my example later today.

Okay, please try extracting to your project directory, and startup/run the project.

Let me know if there’s any issues.

Okay, please try extracting to your project directory, and startup/run the project.

Let me know if there’s any issues.

Just tried it on a machine without a mic, crashed when I hit Play in the editor.

I’ll try running it remotely on my machine at home and report back (which does have a mic set up).

Edit: Confirmed working on a machine with a mic. Seems like there’s probably somewhere you can check so that it won’t crash if the mic is not plugged in.

Hi ShaneC! Thanks for this superb plugin! I have tested the project you uploaded and found a bug. doing anything in the word spoken function (or in the bound event) crashes the editor hard:

Hi,
Thanks for the feedback.
I have locally fixed the issue of the plugin crashing when no microphone is detected.
I am still working on the issue of game thread related actions crashing Unreal Engine.
I should hopefully have a release with both fixes up either today, or at worst, tomorrow.
Glad to see it is working for people

Update:
Okay, I have commited a number of changes to the github project:

The changes are as follows:

Please take a look at the sample project I have added.

If you have any suggestions or encounter problems, please let me know.

Thanks so much for doing this.

One feature suggestion I have is to implement one or more of the other modes of recognition - e.g., the phoneme extraction one (which is useful for lip sync for instance).

It’s certainly something I plan to look into. Unfortunately, I don’t have tons of time.
I`ll take a look into it on the weekend. Cheers

If you don’t end up implementing the other modes, I’ll probably have a shot at it and do a pull request.

Alright, so I spoke too soon

If you Init (press I) then just start talking, just say whatever like you’re having a conversation, this error pops up after a few seconds of speaking: 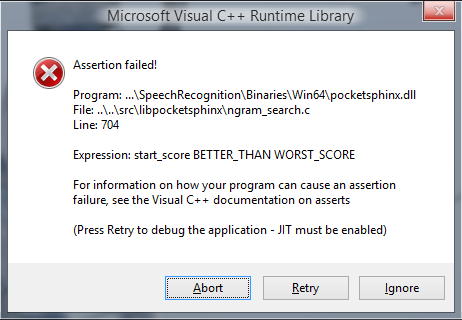 It doesn’t happen if you just say one word at a time with a pause in between, especially if it’s stuff on the word list. You have to just give it a string of normal speech for the error to happen.

Note that this was using Selected Viewport/Play in Editor - I don’t know if that matters versus “Standalone Window” mode.

This also illustrates a problem I didn’t consider - the “Word Spoken” event fires even if the match is very poor (i.e., the user said something not in the word list at all). It seems to me we need a way to filter out matches with a low probability so that the word-list actions aren’t being fired off all the time, even when the user is saying something not on the word list.

Edit: BTW anyone that sees this error pop up - do not click Abort, or the entire editor will go down. Ignore will let you continue without crashing stuff.

Hey,
Yes, there are methods to obtain the probability.
I just simply haven’t had time to work on how to use them appropriately.
I can’t see your attachment, I get the following error

“Invalid Attachment specified. If you followed a valid link, please notify the administrator”

I`ll try speaking long sentences when I get a chance, to see if I can re-create the error.
Thanks for trying it out. Some teething problems, such is life

Ah dang, hold on, I’ll get another screenshot.

Hello. I tried to package my game with this plugin for Android but there were some errors. So I guess it is not meant for mobile?

Sorry, I have never tried it this with an android build, and have no idea what the problem could be. Can you please elaborate on the specifics?
I am changing to a keyword recognition mode, which appears more accurate, and allows a tolerance for each phrase to be individually configured.
Since this change. the crash that n00854180t reported, no longer occurs (at least in my experience).
Stay tuned for an update once I further test the changes.

Hi Shane, cannot wait for another great work of yours. When I tried to package it for android, another compiler tried to build the plugin again. Then there were errors saying that undefined references to pocketsphinx and sphinxbase header classes. So I added a new target platform for android in the build.cs and included a .so library(took me awhile to find out that a .so for android is equal to a .lib for Windows, I am not a programmer).

The library I found was libpocketsphinx_jni.so. However it only applied to pocketshpinx, not sphinxbase. I searched over the internet and read somewhere that sphinxbase library is not supported on android. The errors I get now are all related to sphinxbase library (as attached).

In your speech recognition plugin, sphinxbase library was used to open the device’s mic and to record the audio stream. Since sphinxbase is not supported, I suspect that maybe we need to use other alternative ways to replace the sphinxbase function??