plugin classes are not added to a packed game.

I’v been working on a plugin that works great while in PIE modes ( Editor ).
But when I pack the game it won’t work any more.
I’v used the “Launch” button to play the game via the Editor, So I got the game running in packed mode and also logging to the console. From there I can see this line:

I have a blueprint class gameMode named RMGameMode_BP that is a child of a cpp class named RMGameMode.
The Cpp class is part of a plugin that is in the Plugins folder inside the project.

It seems like It just won’t get packed with the rest of the game.
How do I solve it?

Is your plugin set to Runtime type?

I’v tried all from this page:

How do I set it as runtime?

Go to your .uplugin file and set Type property to “Runtime”. 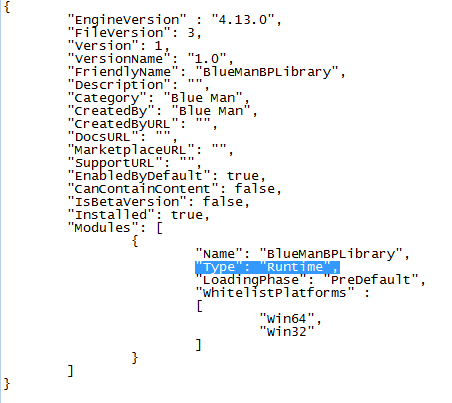 Thanks!
But now I have an other problem.
I get this message when I’m trying to run the game:

It is already there, Otherwise it wouldn’t have worked at all :\

Ok I’v found the solution, It had to be added in the ProjectName.Build.cs PublicDependencyModuleNames array.
Now it works. Thanks a lot for the help!

Hm, can you try to place it in your project’s folder, In your project directory make a new folder called Plugins and place your plugin inside it.

Is your project which you are trying to package a C++ project.

I am glad I was able to help you