I really really love UE (seriously, who doesn’t?), but ugh… it is quite hard to learn. When I started with Unity, everything was clear and easy, and I can make simple game in the first week. With UE, after 2 weeks, I still find it complicated as f… (sorry).
I think UE itself is harder to learn, and Epic should learn something from Unity (as this guy wrote here: http://codepirate.ninja/?p=30), but it is a long story, and we should not discuss here. I just want you to make some simple tutorial like:

Thanks, but your link has too much info. I just need some simple tuts like those mentioned above, then I can take care of myself. But because you asked, I’m planning on making side scrolling and top down shooter games (or something like that). Here are some games I’ve develop(ing) with Unity:
Nia in Mushroom World - YouTube (Side scrolling)
Car of Monster - Ludum Dare 33 - YouTube (Top down)
Project X - YouTube (Top down)

have to agree, Unity have better tutorials, then UE4 … would like to see more small bitsize tutorials , the live sessions is for advanced users, where they show the whole blueprint but not showing how to build it up … would love to see more better tutorials going throught all the stuff you can make with UE and maybe focus on a game type.

+1 i agree better tutorials are needed

Take for example the first section on part three of Epic’s Blueprint movement tutorial, a pretty simple guide which is clearly intended for relative newcomers to the engine, which I tried to follow recently. Quoting verbatim:

"Open the MyCharacter Blueprint. In the graph, Right-click and add the InputAxis MoveForward and InputAxis MoveRight Events. Hold Control and drag in the DisableMovement variable and connect it to the Condition on a Branch on each Event. Set the rest of node network up as shown below. 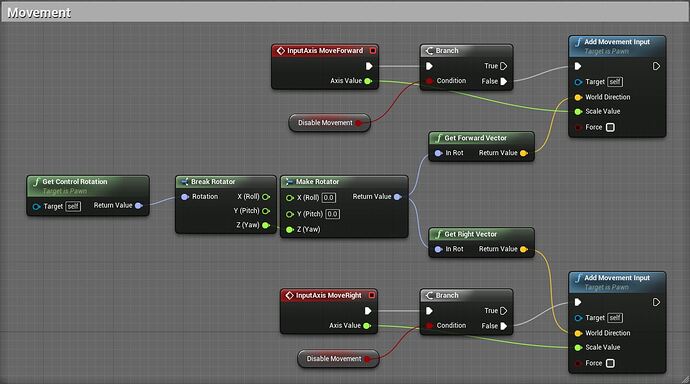 That last statement. Uggghhhh. That’s a heck of a lot of stuff to gloss over. I mean I can kind of guess that the reason that control rotation logic and vectors at the start of the chain are there in order that the character is properly aligned with the player’s directional controls, but that is literally an educated guess on my part. Some kind of brief explanation as to why a developer would want to implement this functionality would make a lot of the basic tutorials a lot easier to follow for newcomers.

I totally get that writing tutorials and guides is a lot of extra work, especially for well-annotated ones, but it would be a huge help for people like myself who have just started dipping their toes into the wonderful world of game-making.

I’d also say that the tutorials should be textual tutorials with pictures, not videos. Videos are probably the worst kind of format for teaching material: they’re too long, not so information dense, hard to browse and hard to glance over.

i am stuck on this one right now myself. When i try to select add movement input and the get right and forward vector it looks nothing like that and the nodes are not compatible. Can someone explain exactly how to set this up

Absolutely agree. The why is probably the most important part, especially for less experienced users. It is something that he been lacking in general in a lot of the resources we have released, but it’s something we are working to improve.

We are always looking for areas we can improve our documentation, tutorials, and other learning resources. We have lots of plans along those lines, but hearing the pain points from all of you is very enlightening. Please continue sharing!

The ‘whys’ take too much time and energy to document ;p
The Wikis are cool because we usually take the extra time to explain things there, a bit, saying why things are the way they are.

Very true. This was my main stumbling block when i started learning UE 4. As a workaround the best in scenarios such as that, do not think. Just do. Do not wonder why. Eventually a little light bulb goes on and suddenly you know why you did certain things. Unfortunately this is easier said than done. My brain rejects information if i do not know the end result first or comprehend why i am doing some things. But i can relate to what you are saying.

i am stuck on this one right now myself. When i try to select add movement input and the get right and forward vector it looks nothing like that and the nodes are not compatible. Can someone explain exactly how to set this up

Make sure that you are creating your Blueprints on the desired character pawn, and not the character controller. One particular third-party guide stated I should have been doing all that logic on the controller and it threw me for ages. If that’s not the problem, try posting in the Blueprints forum with your specific setup, and you’ll likely find a few people who’ll be able to help solve the problem.

I find that a lot of the video tutorials use the level blueprint as a shortcut when setting a reference to an object. You wouldn’t do this in a proper game as you’d have to write the logic every level. They should point out that this isn’t the method you should be using as it confuses beginners.

Other than that I’ve found most of the tutorials useful and easy to follow. I went through the UMG ones for the first time the other day and had a working main menu, pause menu and player HUD within the hour. Considering how complicated the old ue3 scaleform was to use UMG is a piece of genius.