Player won´t stop moving while and after Drag&Drop Operation

I know there might be a solution that I can find via Google… but I can’t get an idea of a search text for this problem. So, I ask this one here.

I created a Drag & Drop Operation in my Inventory system, using the OnDragDetected, OnDrop, OnDragCancelled and OnMouseButtonDown Functions.

This works very well and gives no issues.

The Character simply runs into the last direction I hit, before starting the Drag. And he won’t stop, even if I cancel the Operation.

Here is a short Video of that Problem:
YouTube: Player won´t stop after Drag&Drop
I want to allow the Player to move, while performing Drag & Drop. So, disabling Input for the Character isn’t an option.

This is the movement input inside the PlayerController.: 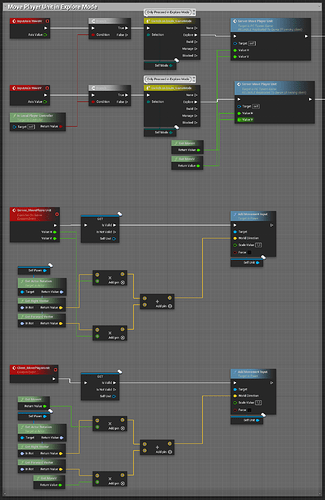 Unbenannt1323×2030 303 KB
(the code is not inside the Character, cause there are multiple units controllable by the Controller. It’s working for all Players)

Perhaps someone can help me out here