I have mostly adapted it to Side Scroller to the level I want except, when he comes out of flying he goes directly into the run mode.

Any help would be great, not a game killer while in Beta, but still annoying.

Sorry, the 3 videos I used where + example video: I kind meshed the 3 together. Did not bother with new animation, just tried to use falling animation. 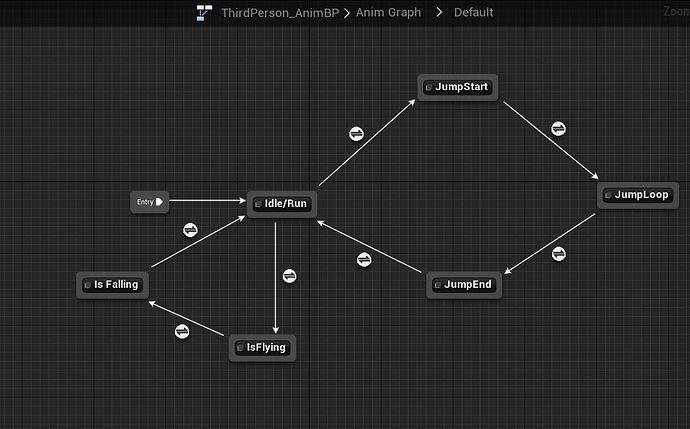 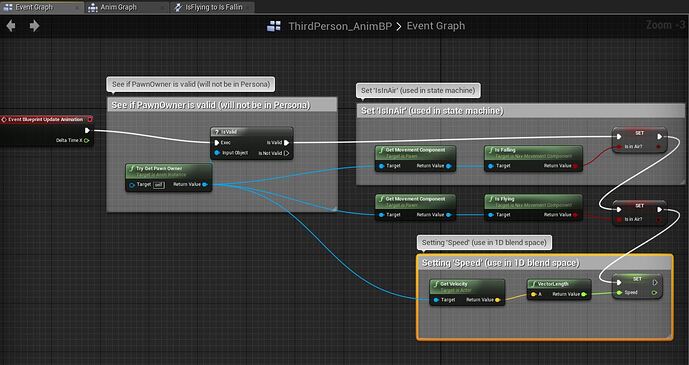 Let’s try it without your IsFalling node. Try connecting IsFlying directly to JumpLoop and make the transition rule check IsFalling (or Not IsFlying). Then when he lands, it should go to JumpEnd and back to Idle/Run.

I edited my comment once I noticed the IsFlying node. Try my new suggestion.

I didn’t understand what you said. The not-IsFlying should be plugged in. And what does the anim graph look like now? If it’s all the way I said then you might want to check that IsFlying is false and the transition is happening. You can run it and watch the anim graph as it changes states (just set the Debug Filter to your character after you hit play. If it doesn’t go from IsFlying to JumpLoop then the IsFlying bool is not false.

Instead of having an IsFlying bool, you could get the movement mode from the character.

Yeah, still no luck. In video, his ran while flying, and fell anim while falling. I got it wrong way around LOL 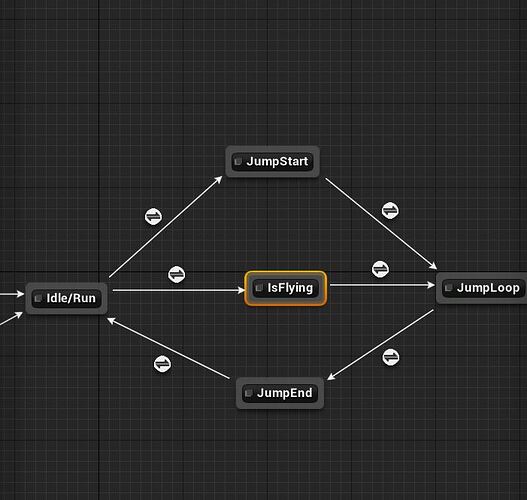 No Node as “Is falling” without casting left and right. tryng transition at end of jump loop

EDIT: That still did not work

I have Third_Person_AnimBP on separate screen, with a yellow box around it. Can not see it go to “IsFlying” From Idle/Run. Going to Set Jump back up to see if I can see that. Give me a few.

From the Picture I posted above, that is the 3 ways I tried. If only 1 plugged in.
Edit: Even now jumps stills run while falling. If I fall off a ledge he still runs. Now I am lost, not sure if Anim Graph, I must be over riding it somewhere

Went over thing with a comb. Had 1 variable plunged in wrong.

Thanks to all that helped

Thanks for your help