Player pick up and size

Try making a vector variable to store the size, set the default value to (1, 1, 1) and then replace your ‘Make Vector’ with a Get of that node. After that, between the Vector + Vector node and Set Actor Scale 3D, add a Set node for that variable. This way the variable will be added onto and gain size each time.

An alternative way to do it would be to change Total Baks into a float variable. This way you can plug it into the X, Y, and Z for your Make Vector node. Each time it is incremented, it should add to the size this way as well. This will avoid needing to make an additional variable.

When a player picks up a subject he grows in size.In my blueprint player grows only 1 time. How do I get up each time the player selects the object. For example, if a player took an object should grow by 1 unit.

Heres a screenshot of the 2nd method: 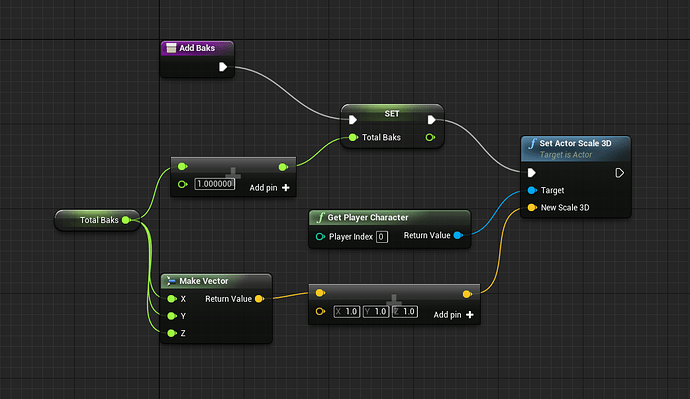 Be sure to change Total Baks from an Integer to a Float, as well as the Integer + Integer node to a Float + Float node.

Excuse me, Matthew, but what does ‘Add Baks’ means and where do you find it in the Blueprint?