Hi everyone!
Wasn’t sure where to post this so it ended up here.

My player character is exhibiting some strange behavior.
Here he is in the preview window: Screenshot - 1b2c5e4fe4f404718d98d675aedc1983 - Gyazo
As you can see, he casts shadow correctly and everything seems OK.

Here he is in-game: Screenshot - 2976a9af4662cdc741e3bf9e6139b6fb - Gyazo
He doesn’t react at all to light (like he’s glowing in the dark) and he doesn’t cast or receive shadow even though all the shadow-settings have been turned on.

I exported the same character without the skeleton (just a static mesh) and put the two next to each other and this was the result: 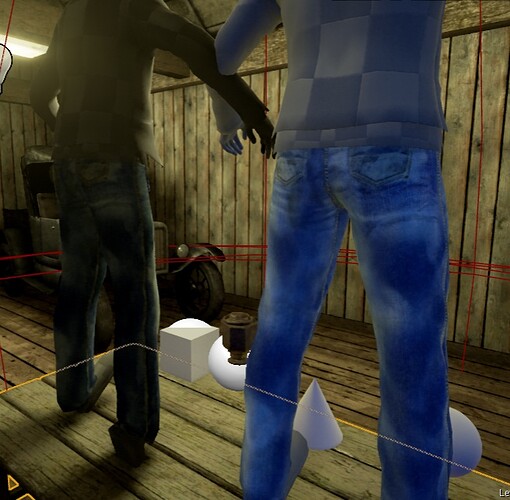 I’ve done this exact thing before and it worked just fine, and now for some reason…this!

It’s a custom mesh with custom skeleton made in Blender.
UE4 computes the normals.

I’ve tried everything I can think of… Please help!

Also, an unrelated question:
Does the player character need a physics asset to cast shadow/receive light?
Or is it just if you want to use ragdoll effect or get specific collision for bodyparts?

And do not panic, watch tutorials and documentation about lighting. Then watch tuts about materials.

Thanks for the quick reply, Nawrot!

I couldn’t find any Lightning setting for the skeletal mesh (as you may have noticed by my question, I’m pretty new to UE)
However I found out that if I changed the lights to Stationary instead of Static, it solved the problem =)
Not as beautiful but at least it works fine now!

I do have one more question/problem.
Just noticed it so I might solve it myself (in which case I’ll update the thread) but when I get close to stationary pointlights the character shadow flickers/disappear on and off.
Could this be because the character doesn’t have any physics assets?
If i drag the character out in the scene and build lights it warns that the shadow may be low res and inefficient due to No PhysicsAssets.
I find it odd that the lack of PhysicsAssets for the character should affect how the mesh castes shadow, but as I said, I’m new to UE.

EDIT:
Apparently Yes, it was the lack of physics assets that made the shadow go crazy. =)