Player animation walks one direction until he falls off the map

I was trying to figure out how to add animation to my character and I was following this tutorial (it’s a little out of date, but I figured out how to work around the changes):

Before the animation, my character movement worked fine and I changed nothing, so the issue cannot be in my FirstPersonCharacter blueprints. The issue came from something I wrote, but me being fairly new to UE4, I can’t seem to find my mistake. I will post screenshots of where I think I may have messed up. If anybody can point me in a direction of what could be causing this issue, I would greatly appreciate it. Hopefully these screenshots will be enough, but if you need more, I can send more.

Important Notes Regarding the Issue:

-The character will continue to walk in one direction

-Nothing stops the player from moving

-Can jump, crouch, and prone, but cannot move left, right, or backwards 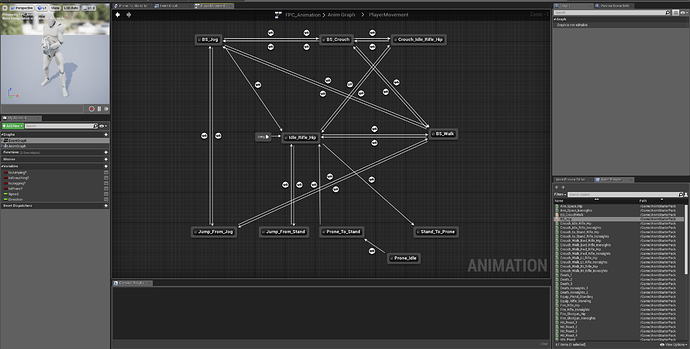 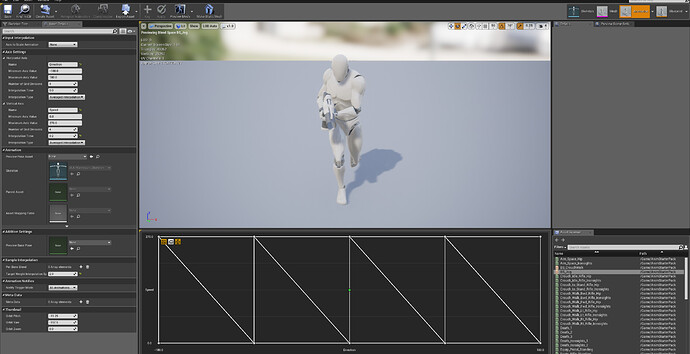 Okay, you were correct about the animation not having anything to do with it. That’s what I thought also, but I thought I didn’t change anything in my FirstPersonCharacter class. By deleting parts of code that I found suspicious, I narrowed the issue to this block of code.

I’m suspecting that something is triggering disable movement and not allowing me to move left and right, but it doesn’t make sense because I am still able to jump and stuff. I would have to look at the tutorial again, but I’m pretty sure I did what the tutorial said to do…

Well…silly me. Forgot to plug in “Axis Value” into “Scale Value.” Thanks for helping me narrow down the issue to FirstPersonCharacter, otherwise I would’ve went through the whole animation blueprint. Much appreciated Kipplinger!

The animations shouldn’t have anything to do with how your character actor moves around, unless you are using root motion on said animations so make sure you aren’t doing that. After that I would look over the player controller / actor blueprints to find what is making the character constantly move since it must be coming from there, (or previously stated root motion). If you want to make 100% sure the animations have nothing to do with the movement, just deselect the animation bp from the actor, (its under the mesh in the character actor), this will cause it to not use that blueprint at all.

// I hope that helped somewhat.