Experience atmospheric action-platformer mixed with bits of exploration and puzzles that will take you far from home to a beautiful but dangerous alien world, at the edge of the universe.

Latest
Hello everyone,
It has been a while. We’re working hard to make sure Planet Alpha 31 will be a special experience but wet took a moment to post this short clip marking our 1 year anniversary since the company was officially formed, and to remind ourselves to take a break and relax once in awhile.

Hello,
I want to share with you the little game I’m developing in the spare time of my spare time: Planet Alpha 31 is an immersive, story driven puzzle platformer mixed with bits of exploration and action.

Story
When mankind is forced to abandon Earth, a team of explorers is sent to find a new home. A suitable planet – Alpha 31 – is found and the Terra-formation begins.

Soon after the process started, an incident causes the Terra-formation to revert with catastrophic consequences for the planet.

Description
During your stay on the planet, you will face both alien and human enemies, each having to be overcome in a different way. To survive you will have to explore and to be observant of this strange place.

The events take place in a living and constantly changing alien world: real-time day and night cycle affects everything on the planet, the Terra-formation process shapes the landscape before your eyes and the 2nd dimension that became accessible during the incident will offer a special experience.

The ability to change the planet rotation will allow you to control alien technology and to affect the planet biosphere - this special mechanic is tied to every part of the gameplay, from puzzle solving to platforming and action.

Real-time day and night cycle
The planet flora and fauna, and all the strange lifeforms in between, react naturally to the succession of day and night. You will have to observe and make use of the different behaviors in order to survive on this beautiful but dangerous world.

Multiple dimensions to explore
Inter-dimensional portals appeared on Alpha 31 after the incident that reverted the Terra-formation process. In your quest to save the human race you will explore these mysterious dimensions where things are not always what they seem.

Other Notable Features
- Retro sci-fi atmosphere that combines a sense of wonder, loneliness and danger during the exploration of Alpha 31.

- A mysterious 2nd dimension accessible through the portals that appeared after the incident.

- The Terra-formation process that constantly morphs the landscape.

- Multiple environments to explore, both on Alpha 31 and outside, each offering an unique experience.

- Use a wide range of gadgets to help in your quest.

Media
The little I have shown of Planet Alpha 31 so far received great attention, including:

“Building a platformer to manipulate time” - 80 Level](Planet Alpha 31: The Changing Nature of Platformers)

“The idea is to interact with a living world” - Siliconera](http://www.siliconera.com/2015/04/12/you-rotate-and-morph-entire-worlds-to-solve-puzzles-in-planet-alpha-31)

A Day on Planet Alpha 31 made it on IndieCade ArtWall PLANET ALPHA is an adventure set in a living alien world.

Join the web’s most supportive community of creators and get high-quality tools for hosting, sharing, and streaming videos in gorgeous HD with no ads.

Growing Up started at the beginning of the year as a pet project made in Unity but a couple of weeks ago I decided switching to Unreal Engine.

Summary
Growing Up is the story of a little boy that uses his imagination to escape the hard times of growing up. The adventure begins when the boy football gets stolen by the bullies that are terrorizing the neighborhood.
Immersed in the fantasy world he created, our hero will have to solve puzzles, prove his agility and confront the monsters of his imagination in the quest to retrieve the stolen ball.

The game plays as a rewarding 2.5D Puzzle Platformer mixed with bits of Exploration and Action, all taking place in a sci-fi - fantasy world. The visuals will paint a colorful image of our protagonist imagination, combining surreal and abstract elements, with everything being wrapped in an artistic layer.
[HR][/HR]

Hi guys,
As I was saying the project started at the beginning of the year in Unity and I want to show you where I got until 2 months ago when due to lack of time I put the project on hold:

Some screenshots from Unity - more here

I’m pretty happy with the look I got in the Unity version but I know there is no chance to get 100% same result in Unreal so I’ll not to even try.
While I want to keep the main direction, switching engines is got me the opportunity to do some extra style exploration and one of the things that I want to change is having real-time day/night cycle.

So currently, besides watching all the tutorials I can find about UE (Zack you’re awesome!), I’m porting the assets over and I’m doing rough lighting/materials exploration:

Btw, this is what I got after about 4 months in Unity:

And this one: Growing Up - March 2014 Update *pre-alpha on Vimeo - apparently there’s a limit of 1 video in a post

Anyways, one of the reasons that made me switch is that because I’m lacking advanced C# skills so I ended up spending more time trying to debug and bug fix the scrips then I was doing anything else. But it’s much more than that and so far I couldn’t be happier with the choice I took - keep up the great work @epic!

Also have you looked into using Fraps or Shadowplay to record your videos?

If you have a G-Force Card in the GTX 600 series and up you can use Shadowplay (which comes with the Gforce Experience App), and it works pretty well with very little impact in frame rate.

Bookman, I was working on a MBP when Growing Up was developed with Unity and ScreenFlow is the closest you have to Fraps on OSX - however I was still unable to capture smooth FPS.
Anyways, working on a WinPC now so I can do proper fraps

So lately I worked on the day/night cycle, both how to achieve it technically so I can have as much control as possible but also artistically, exploring color themes for light, etc.
Bellow is a capture from the 1st test and it’s done with one directional light and a shader for props where I can control the left and right rimlight. Parameter collections and material functions are super awesome btw!

It’s super rough and I’ll probably keep tweaking the colors for a while:

Superb Job AdrianLazar! Very glad to hear that you will be using UE4 for Growing Up! The gameplay, even though it is from Unity, looks awesome and I can’t wait to see how it looks in UE4. Be to keep us updated as you progress with the development of your game. Have a great day!

Hi Sean,
Thanks a lot for the kind words!

Here’s another update on the Day/Night Cycle look:

I changed the proportions of some props, added new ones and worked a bit on the colors in general. I’m starting to feel happier with how the day time look but night is still terrible - I’ll have to find a way for the sky to not become so dark but also the color scheme for night doesn’t really work right now.

Does anyone know if it’s possible to change the colors of the atmospheric fog? In my case I would like to prevent the sky from becoming pure black during night time. I’ll try to keep the light at a certain rotation so it will stay at late dusk or something but would be good to know if there’s a way to hack the atmospheric fog colors.

Thank you Chance, I’ll do my best to keep the thread up to date, helps my motivation

Looks great, couldn’t you keep the colour of the sky dome brighter instead of playing with the fog at night?

Glad you like it Anadin.
All I have as background is an atmosphere fog without a skydome and that produces pretty good colors for day, dawn and dusk based on the sun rotation. I was thinking about adding a skydome visible only at night but maybe I should try to have one all the time.

Very cool work, AdrianLazar!
I like it, keep it up!

Glad you like it Anadin.
All I have as background is an atmosphere fog without a skydome and that produces pretty good colors for day, dawn and dusk based on the sun rotation. I was thinking about adding a skydome visible only at night but maybe I should try to have one all the time.

Ah, I assumed you had a dome there because of the stars - what is driving them?

I wanted a bit more control over the stars, as well as a parallax effect for when you move in the level so I ended up doing a 3d mesh made of planes that looks like this:

Then the material is changed using by the Day/Night Cycle Blueprint using a Material Collection Parameter.

Actually I was thinking about making a short video about how to model a procedural start field in Houdini.

I think it looks good enough for now plus I’m getting tired of tweaking colors so I’ll stop with this and continue with something else. I would like to make the night a bit desaturated but for that I need to figure out how to change the post-effects realtime using the blueprints.
Plus I’ll most likely tweak the day/night colors until the end of the project

Sweet. The Post Process thing is not not too hard, either have an unbound Post Process Volume in the level and do this in the Level BP or in like this example, in a camera or player controller or pawn/character BP, you can Break and Set the Post Process of the camera. For some reason you need to link up that Blendables Array for it to compiles though 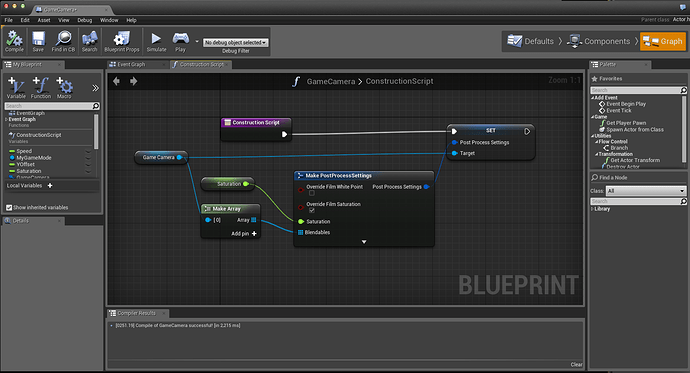 Found a bit of time to work on Growing Up and this time I focused more on game-play than on visuals.

That’s about it for now:

Interesting, how are you doing the green flash and making the platforms disappear? it is just alpha?