Physics for ponytail not working correctly

I’ve been trying use physics for the hair of my character for months, but no matter how I tweak the values, I just can’t get any decent results out of it. It looks ok when I pull and poke the joint chain in the physics editor, but it gets completely destroyed in the game. On top of that, the joint chain ignores the collision bodies in-game, but they clearly work in the editor.

I’m using substepping and played around with those values as well. It’s better than without substepping, but definitely not usable.

Is there anything more I can do other than changing the dampening values of the physics bodies or limits of the constrains? Are physics simply not usable for fast moving objects?

I’m completely out of ideas with this, so any help would be very much appreciated.

At least this part IS working for me, i even have some rigid hairbunch working, but for the problem here i had something similar, as i have collision set up inside the chest neck and head, the hairtail would still go through the chest, not shure why but it seems the same than this problem, will try to find another setup or solution, and come back when done

always glad to help as far as i can

i need to find that chararter back first, that will be very soon, and i will post them here again, but i think that the values only are not enough

Thanks for your reply. Could you maybe share the values you used for your physics chain? It’s good to know that it -can- work, but unfortunately I’m still no closer to actually -making- it work.

As i lolok more at this clip at the bottom, did you use an extra bone at the beginning , that is not realy starting inside the ponytail itself, i mean i had this bone where the ponytail would start but almost stick to the head the ponytail starts a bit further, that may be some sort of “stick to outer” method, i will try to post an image of what i mean

Thanks for the illustration, but yeah, my setup looks very similar to yours.

My hair chain was initially oriented at a downward angle instead of being completely horizontal. But I just changed that and the issue remains.

Well actualy i forgot something and if i remember well this changed everything instantly, i almost never save any max file i just export and go on, now the only thing that did work in the end was the type of connection used, i did try all of em and finaly type “general” almost worked immedialty without tweakings, i made all locked first and changed srping and damp a little, then gave it some body thickness and self collision, its working

now what you see here is not realy what you have, as yours is a little lighter, but even then you should whtch out also with seperate meshes for hair, they tend to come loose and even, like in the case of another char i have, simply drop off by start, i solved that by restarting them and have single long meshesconnect with one bone, anyway not that important as you use masfx and not skin anim, but still, this is a problem a had years ago with an older UDK version and even in UT3 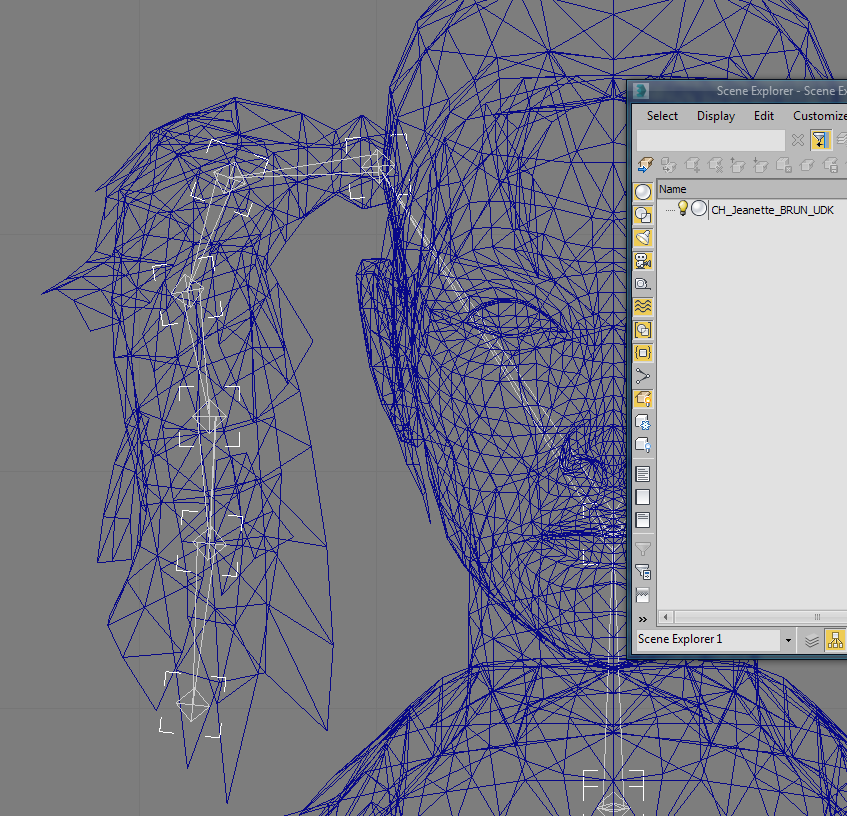 for example this was the char before tweaking simply and the tails kinda droped immedialty after startingjust completely droped off, after collapsing all these separate parts of the tail i used that bone near the head and it solved it greatly, just at start you may see one small piece fall off, byt thats where it stops, anyway it think in some way you are right there will always be problems with fast movements, as i have seen long time ago on some site, that when you tear to hard on the model in The editor preview, it will eventually break off, so i guess it is the same in game with fast movements, but just maybe not as visible as on your model, i am willing to help you on this becos myself i was pulling my hairs out (hence i am almost bald now) with this apex thing, and if i find more i will post again

Thanks again! I’m using Maya, so I can’t replicate your 3ds Max workflow exactly. But your information gives me some stuff to try out.

I managed to get rid of the joint separation with the “projection” settings of the constraints in UE4. But it’s still behaving very strangely when I move around, regardless of how I set the damping values. Once the character is standing still again everything looks great.

I’ll keep trying, but I fear I’ll have to animate everything by hand to get acceptable results…

looking better than before i would say, no more exesive stretching

It seems this is a bug in 4.8. I tested it in 4.9 from Github (as recommended in this forum thread) and the physics movement looked great. There’s still the issue of collision not working, but I suppose I better create a new question for that.