Again I need some help with a potentially stupid issue. I’m setting up a Pawn for both VR and regular PC navigation. The thing is that every time that I Play the game and do some movement, such as moving forward, the pawn apparently jumps on itself a few centimeters, so say of instead of being at 1.60m, it gets at 2.00m… but ONLY when I move it.
I don’t want that, and I have a strong feeling that it has something to do with the hierarchy and collisions of the pawn. Here’s how it’s set up: 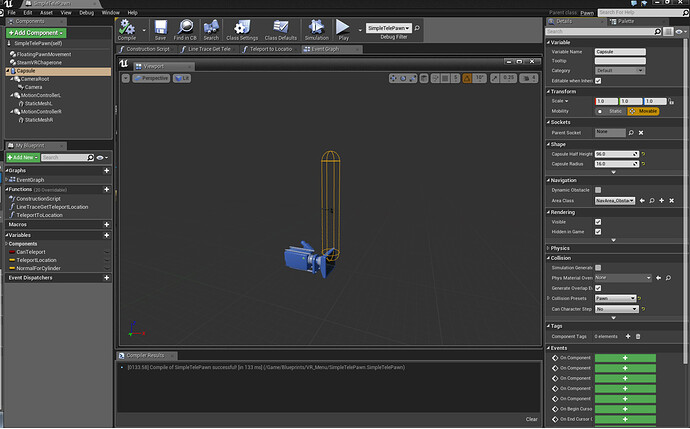 I’m using Mitch’s method for teleportation, and the FirstPerson shooter template for the movement method… so it’s a mix.
Any help would be much appreciated!

Just to give an update, I didn’t find a solution for this, but ended up making a brand new Character blueprint that solved that issue.
Now I have another problem… the Vive Controls don’t appear to be tracking correctly, the’re not on the proper position. Any thoughts? I guess again it’s the hierarchy of the objects: