I’ve always noticed that replicated pawns seem somewhat ‘jittery’ when viewed from clients. I’ve run some tests and can see that the pawn’s location vector is being rounded to the nearest integer. Hence, as the xyx values move between round integers, the pawn appears to jerk to the new location (at least i believe this is what’s causing it).

Here is a quick video of what I mean: 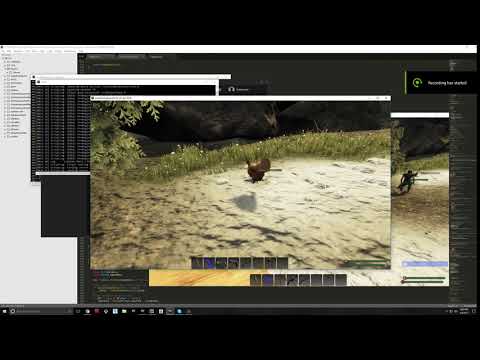 I’m not seeing much handling for this in any of the example UDK code, which is kinda surprising.

I see some params in UDKPawn:

However they seem to have no affect at all. I also don’t see them actually used anywhere in the US engine code.

Does anyone actually know where in the code clients receive the location sent by the server? Or is this hidden away in native code?

I have the same problem, games like chivalry medieval warfare don-t have such problems I wonder how they did, did it.

I have an idea that i think i think what is used in chivalry mediaval warfare cold scooter, With advanced foot placement the mesh gets attached to the floor so it never jitters just stays on the landscape https://docs.unrealengine.com/udk/Th…lFootPlacement here we have a hacky solution. Advanced foot placement it’s what we are looking for.

Chivalry doesn’t even use foot placement, and movement seems jittery across the net (proof)
foot placement might help, but getting foot placement to work over jittery movements is a pain in the first place (even in single player), especially as anything you do from code will be one frame behind. you don’t just “attach the mesh to the floor” because the mesh is a child of the Pawn, and therefore everything you do to the mesh is an offset in relation to the Pawn itsef.
as the Pawn gets authoritative movements from the network you’ll be just fighting a more complex problem.
unless…
unless you use absolute translation in your Pawn and pass it manually every frame. but then your Pawn would be one frame behind at all times. it might just work

Coldscooter: unfortunately those params are from UDKPawn so I can’t tell you anything about them native-wise

the only lead I could give is to try in vanilla UTGame, fake some net lag and packet loss (there’s console commands for this) and check if it’s the case (I’d be surprised if UT has this issue)

I’ve attempted my own pawn smoothing logic for clients, which works pretty well:

thanks a LOT for sharing cold scoota

I know you solved it but I’m curious if just smoothing against the previous frame/update location is enough. don’t you still have some jitter or at least a bit of inconsistency?

I’m working on a game in 4.26 - I had my server registering physics smoothly but the client was jittering quite a lot. I looked in the Pawn’s blueprint and found the Net Update Frequency was set to 100(seconds) “How often it’s considered for movement updates”

I set it to 0.1 and now the client sees the physics running smoothly