I have written a guide to help you pause your game when the Steam Overlay becomes active. It’s quite extensive, but is very thorough, so I hope people won’t encounter any bugs, errors, or crashes like I did. I spent more than a month trying to get this to work and became very frustrated at times.

I know it has been a long time since you have posted your tutorial, but we are now in 2020 and I am a blueprint only developer which would like to know how to pause a game when the steam overlay is called.
I have followed your tutorial with care, but at the time of compiling the code (in Unreal or VS), I have a lot of errors.

I would like to know if you could test and rewrite your tutorial for the latest engine and steam sdk (I’m on 139). Or if I could show you the errors given by VS?

If anyone comes here and has any idea of how to do this please let me know.

Michael. I am using still basically the same system as the tutorial. It does involve CPP, as I found it easier to write it down in CPP as the API for steam is in CPP.

What errors are you getting? Is this a blank project? When did the errors come up? I suggest that if you are new to coding, to compile often, just to catch errors in small batches than to write a full system and then compiling.

I agree always compile often or if in blueprint run the script and catch errors as early as you can. It is increasingly harder to troubleshoot errors as you get more of them. The more you have at once the harder it is to tell what is causing you the headache and it can get rather insane rather quickly.

I hadn’t seen this post I must have missed it as it was posted back around the time I began using the engine. Do you know if any other solutions to this have popped up? I’m also curious about handling other overlays like the radeon software overlay or whatever else is out there now.

Unfortunately I’m having an issue using the Wiki as the function OnSteamOverlayIsActive() that is present in mygameinstance.h says it is already defined in the SteamManager.h , but then if i dont define it in the gameinstance.cpp as well, it gives me a compile error…

I’m having an issue when I’m including the steam API, it gives me several errors on MyGameInstance.generated.cpp. When I take out the Steam API, the code compiles. And I’m stuck between these parts.

I can see the overlay screen on my game (which I followed this video to integrate Steam with Unreal: Unreal Engine 4 Tutorial - Steam Achievements - YouTube)

But I can’t follow your wiki bc of this error

If you want a blueprint only solution, you can get the SteamCore:: plugin from the marketplace, I’ll even include an example for you on how to pause your game when an overlay is opened: 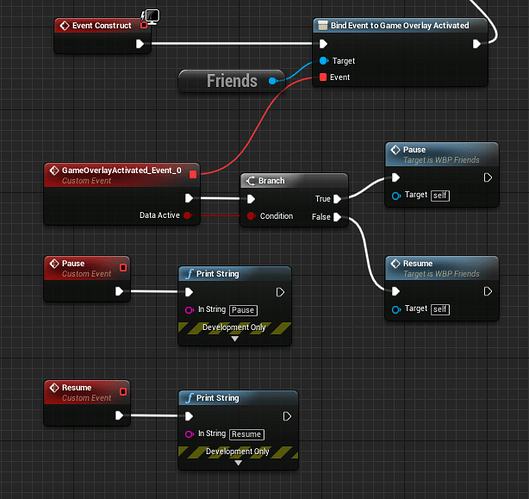 The only thing I’m after is an event to pause the game when the Steam Overlay starts. I wouldn’t mind programming this specific event myself. Unfortunately, I can’t afford the plugin, that’s why I’m seeking help to create the code. The one I’m trying to do via Unreal Wiki is giving me ton of errors on the generated.h files when I include the steam_api.h on SteamManager.h