Hello I wanted my “flamethrower” particle to get my character velocity so I added Inherit Parent Velocity with settings x=1 y=0 z=0 however it only works in World X axis and never takes any particle system rotations.

I made a little video to show. Particle rotated 90 Yaw but still getting velocity only for X world axis. Any way to fix this? Inherit Parent Velocity only takes into consideration the amount the parent has moved any given frame. It then applies this movement to particles multiplied by the velocity scale. By using the values 1,0,0 you multiply this movement by 0 along the y and z Axis. That is why you are only seeing movement along the x axis. Try the values (1,1,1) to see if that gives better results.

Unfortunately there isn’t a local space option for this module.

by using 1,0,0 I multiply by 0 along y and z, not X. Im not setting values 1,0,0 for no reason. I need it to inherit from only local X. “Unfortunately there isn’t a local space option for this module.”??? What does that mean. There is literally In World Space checkbox!?!?!?

Thanks for pointing out that typo the post has been fixed to what was intended.

Now regarding what I mean, the Inherit Parent Velocity(IPV) module inherits what coordinate space to use from the required module. This means it is already in world space.

You can confirm this behavior yourself by changing the required module to “local-space” and then keeping the inherit parent velocity at 1,0,0. You will see that it will move along the X axis according to the parent’s orientation.

You make a good point as this behavior means that the World Space check box is effectively useless. What should have been included with this module is a “local space” checkbox and this is what I am saying is unfortunate.

This appears to be a limitation of the cascade particle editor and the behavior seen is expected. Normally, I would put in a feature request but with Niagara in development I doubt it would be addressed in all honesty.

If you want to only inherit from the X axis relative to your character there is a potential workaround, but its going to take a little bit of work to set up. This assumes that your particle system is in world space. 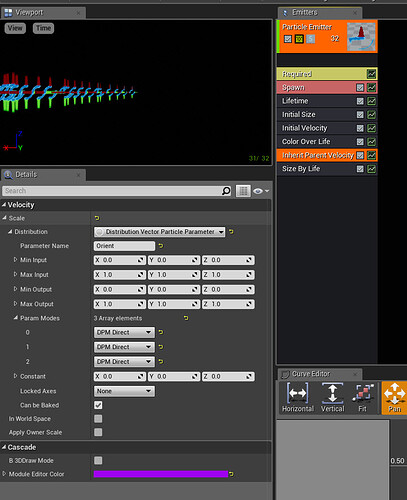 [Here][3] is a very short example video showing it working in action.

Well, things start to make sense now. I guess we can blame it on a lack of documantaion. Big thanks for answer, sir. Have a great day