Paper2D Sprite Pitch Rotation: Why do my Input Axis values apply to yaw, but not to pitch? 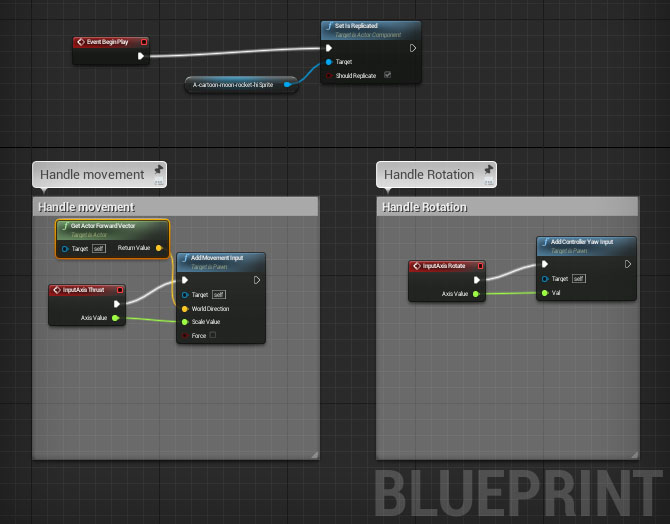 I’ve heard there was a bug with pitch in relation to it’s degrees of rotation, but I cannot get my Paper2DSprite to rotate at all in the pitch rotation. When i use Add Controller Yaw Input function, the yaw will rotate properly. But if i simple change the function to Add Controller Pitch Input, it won’t apply the axis values from my axis input to the Pitch. Is this another bug, the same bug, or am I just making some obvious mistake here? 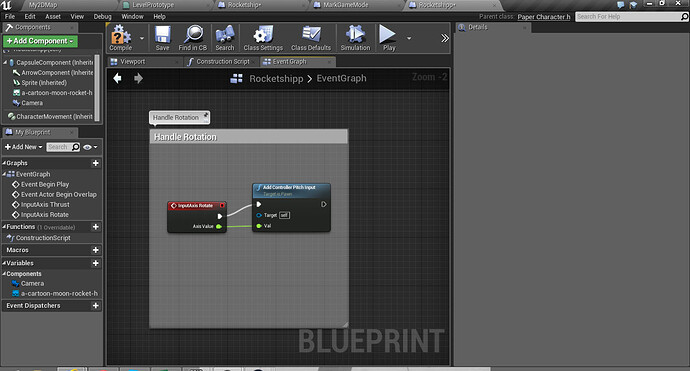 I’ve figured this out! And it’s ridiculously easy. When the game is first created the actual 2DSpriteCharacter is only allowed to rotate in the yaw direction (probably to simulate general third person shooter like mechanics). If you go to the Object (self) properties, in the top left of the blueprint under components, the description will appear on the right. You can then check the User Controller Rotation for Pitch, then you will be able to edit the pitch… sadly, the bug still exists where you can only rotate 90 degrees which will prevent you from rotating the Pitch from 180-360 degrees

but i do believe there may be a work around… 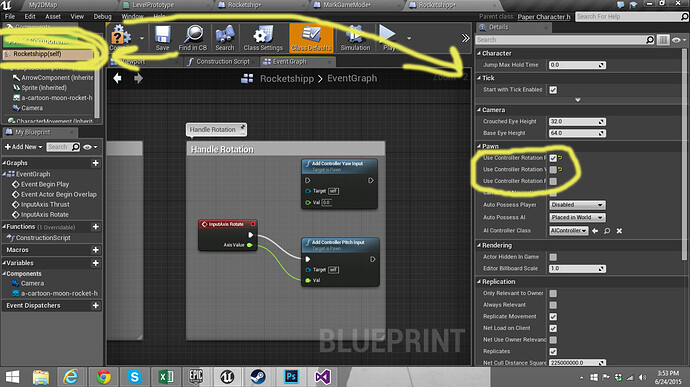 If you use a Timeline to set pitch to 180, it works. Make the Timeline instant if you want to change the pitch instantly. I know it doesn’t make sense to use timeline to set something instant but thats what we can do so far.

hey a fix is a fix and it makes my game work, so im more than greatful for that

thanks for the help, I really appreciate it… Im kind of new to blueprints, do you happen to have a blueprint for doing this you could share? In the meantime, I will be working effortlessly on this and will post the solution here when I understand the mechanics of timeline and can get it to work so that anyone with a similar problem can easily just replicate the blueprint

Sorry for not responding, incase you didn’t find the solution, here is how;

Create a Timeline, make a float track in it. Make it a one second float track. Have the first point (0.0 sec) as 0 and last point (1.0sec) as -180. First set New Time to 1.0, then play the Timeline. Output the Update (or Finished) of Timeline to Set Actor Rotations pitch, then you are done. Do the same for other way around too.

I didn’t test yet, but you can make a float track with 0.0seconds and simply play it. Just making that only point as -180 and “Finished” output will turn the pitch around instantly. (Considering the old pitch is 0. You would do vice versa to turn the sprite around 180 degrees, which would require a second timeline)

I don’t have the comp. with me at the moment so I can’t visually show, but if you need any more help, I can try something out.