So I’m trying to package a project in Unreal Engine 5.0 but whenever I try to build it it completes the process immediately and spit out “Packaing complete!” but without anything done.
I’ve been looking at some previous posts like below, but haven’t gotten anything working yet.

Hey guys, I am unable to package and get the following error. https://gyazo.com/552f7c1a3fd0644c340272be1e6f8a33 I have both visual studio 2017 and 2019 installed both have the correct install settings with the appropriate Unreal Engine installer options ticked on. I have also gone to the link referenced in the error and installed .NET 5.0 and it still didn’t work even after restarting the PC. I have also tried with .NET 3.0 and .NET 6.0 but still no luck. I’ve tried reinstalling UE5 as well.…

Any thoughts on it would be greatly appreciated. 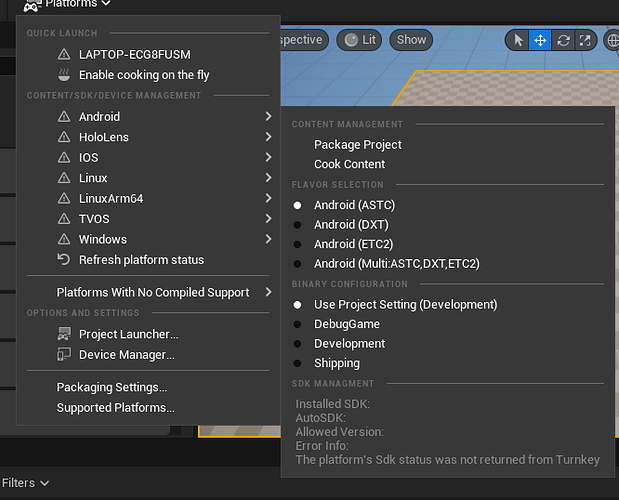 I’m curious to this as well - I’m having a similar issue when compiling in UE5 with this same log.

I did run into the same issues. For me, the installation of the dotnet-sdk-3.1.417-win-x64 from This Microsoft link - at least I can confirm that this definitely worked, having VS2019 installed.

SDK 6 versions are only for VS2022 as to the microsoft docs.

I did want to follow up as I am actively building now - for me, it was with the PlasticSCM Source Control plugin that was conflicting, I tried various dotnet installations with the same results.

I’m planning on digging into what specifically the plugin was doing to cause the error, but in the meantime I’ve removed it (unnecessary for what I’ve been working on) to move forward. Once I have some time to troubleshoot further, i’ll follow up if helpful.