Please try a newer version of the engine and see whether or not you’re able to package a newly created template project for Android. Also, double check to make sure that in C:\NVPACK\android-sdk-windows that the SDK Manager has ‘All Tools’ downloaded and installed too.

Let me know how it goes, thanks!

I tried to package a new project (version: 11.2), It resulted in the same error. Next I reinstalled codeworksforandroid because the version located in engine/extras was 1R1. In the android quick start guide (from ue4 documentation) there is a message: “If you have other versions of the Android SDK installed, it is highly recommend that you uninstall them and then re-install CodeWorks for Android using the CodeWorks for Android 1R4 installer that is bundled with UE4”. So I downloaded and installled 1R4. But I got some problems during installation which forced me to reinstall visual studio. In the end it all works (I think). But I have got the same error while packaging the game. Also I checked if all tools were installed. I don’t know if this is all the tools but the tools I see: build tools and platform tools.

Install 1R4u2 since you’re on 4.11.2. Make sure that once you’ve done that, you’ve installed the proper versions of the Android SDKs and added them correctly to the engine. 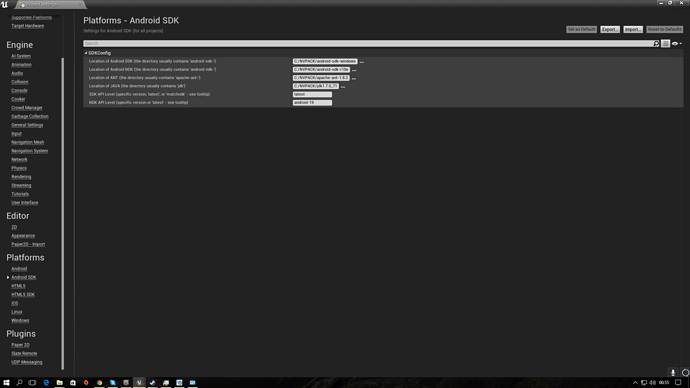 Update 2: I installed all tools in SDK manager in C:\NVPACK\android-sdk-windows. (First I thought I did this but it didn’t understand it but after some research I knew where to look and managed to install the tools. Still it doesn’t work

It looks like you’re on the wrong version of Java, please update it and try to package again. Let me know if that resolves your error.

I tried it (java is now up to date) but it stil doesn’t work. After some research on the web, I opened cmd an typed ant debug . Result: Buildfile: build.xml does not exist! Build Failed. I don’t know if this means anything but I still wanted to share it because the more information I share how faster this problem can be fixed (I think/hope)

Make sure your settings are set up like this:

It works! First I moved SDK,NDK and ANT file to C:. After that I installed from 1R5 the jdk 1.8 (prev version 1.7) moved this to C: and adjusted the project settings. Thanks!!