Just upgraded to 4.10.1 and went to package a new clean project (deleted majority of default template stuff except the map and mannequin). The reason for packaging a new clean/empty project is just to start from scratch. We have a decent sized project that started in 4.8 and last version we edited it in was 4.9.2 but we have build/package issues with it and can’t figure out (even from the log) what the issue(s) are. I am now redoing the entire project in a new, clean version of 4.10.1 and will continue to package it at every major implementation to ensure our programming stays in compliance and we can package throughout.

However, I went to package the new fresh project and I get a screen that pops up and says that I don’t have Visual Studio 2013 installed, even though I have it running in the background! See the image for the message I get. Although there hasn’t been anything I’ve had to do in the past, is there something I need to do in order to let Unreal Editor know that I have Visual Studio installed? This is a blueprint only project. C++ may be added down the road but is not needed at the moment. I shouldn’t have to create a blank/plain C++ file just so I can get the editor to package the game for me, do I?!?!

Thanks for your assistance! 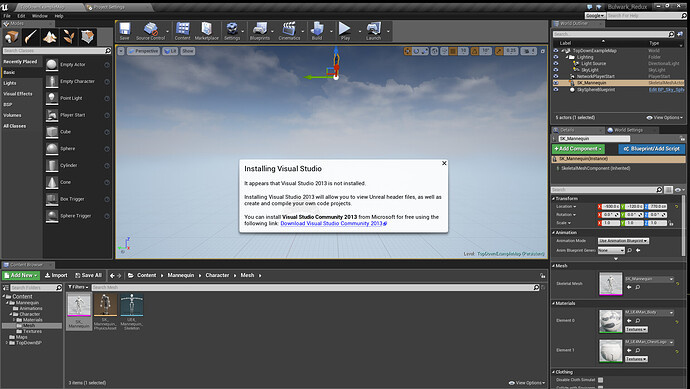 *Important: The launcher distribution of the engine now requires Visual Studio 2015 with C++ support enabled. Please upgrade your team now! If you use the New Project wizard inside Unreal Engine, we’ll help you get Visual Studio 2015 downloaded and installed. *

If you need to continue using Visual Studio 2013, you’ll need to compile the engine yourself from the GitHub source code

Also seems they need to update the prompt in the editor (the one from my image in the OP) as it still says 2013.