Overnight, half of my objects disappeared

Last night, when I saved and quit the project, all geometry was in place of one particular import. Today, a large chunk of those objects were just gone. They were still there in the World Outliner, but when I clicked F to focus on them, it just focused on the origin. I had to go into the Content Browser and find the Datasmith file and reimport it, and then all objects appeared again.

Has anyone had this happen to them?

I just discovered that with a certain object, this happens every time I launch Unreal Editor.

EDIT: More than one object has this happening. Reimport from content browser correctly makes the objects show up in the game view (note, again, they’re still there in the outliner, still visible, but focusing on them just zoom in on the origin).

Ok, this is getting weirder and weirder:

If I delete all the objects from my world outliner, and then drag the original datasmith scene from the content browser into my world, the objects are STILL missing.

But if I right click the datasmith scene in the object browser and click reimport, they appear.

If I drag the SAME datasmith scene a second time into my world, the objects disappear again! And again, I can right-click in the content browser to reimport and they appear (all the while the objects are fully there and fully in view on the first one I dragged in).

This is repeatable for me, and every time my message log is spammed with this: 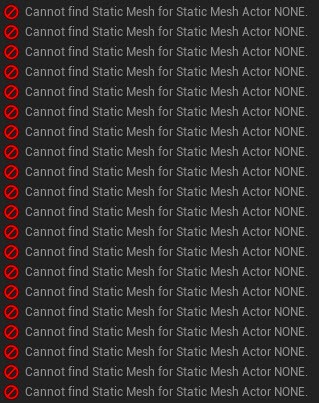 You should report that to https://unrealstudiohelp.epicgames.com/s/ with as much information as possible on the bug report, so they can figure out a solution

Not sure that would help in this case, because in order to send them these particular files, we’d require a signed NDA from Epic first, and I don’t think that’s possible.

That’s why I turned to the community to see if anyone else have experienced this, and if anyone even has a more permanent solution than keep reimporting…

EDIT: I just did a “save all” and my message log filled up with hundreds of meshes from one of the problematic objects containing “invalid data”…

I ran into the similar issues a few days ago I noticed that if your objects are named NONE or have NONE prefix on import they wont save properly once you close the editor they disappear and the actors will be empty. However if you rename them and re-export it will work/save fine.

Yes, that was it! Thank you.

3D Studio Max quite often likes to name objects as NONE during an import. We have a script that automatically renames all objects according to the name of its group + a number, but it’s quite often that I forget to run it.

I’ll try to be more dilligent with this in the future.

If the issue you are experiencing doesn’t match with one of the known issues logged here: https://issues.unrealengine.com/issu…mponent=&sort=

Then please file a new bug report for our staff to investigate here: https://unrealstudiohelp.epicgames.c…community-page

That is indeed a bug we never encountered before. It looks like Unreal has some reserved names as show in this image: 2018-12-04_1758

Datasmith never verified for those. We will look into it.