Screenshot of your project (in editor) 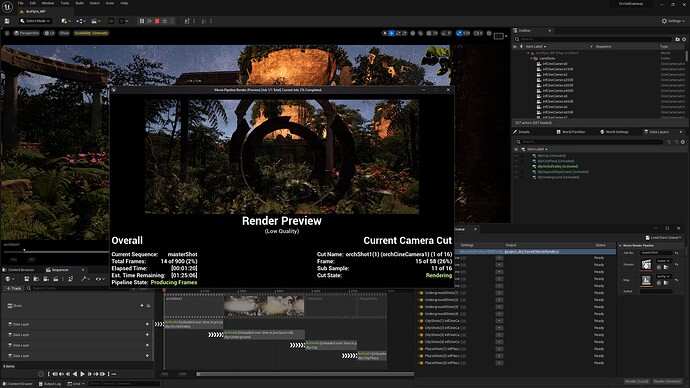 Description:
I wanted to showcase Unreal Engine (UE) 5, Lumen, and my experience in combining and rendering multiple worlds with Dynamic Global Illumination (GI). I used World Partition, Data Layers, and Streaming Virtual Texture to somewhat escape GPU VRAM limitations. To showcase the lighting therme, I demonstrate dynamic lighting of worlds in the daytime, nighttime, wilderness, and urban city environments with real-time GI. I also wanted to showcase FX lighting. My artistic vision desires less fog, especially in sunny and indoor environments, but still wanted to visualize, steam, the atmosphere, and the sky. The new version of Unreal 5 and Lumen lighting features allowed me to achieve this artistic goal allowing me to visualize valuable details, and enhance scenes above and beyond what has been possible before.

I created the Orchid Valley Environment prior to the competition for my music video project, the (Orchid Valley 4K Music Video) with a custom-built UE RTX GI from the NVIDIA branch using advanced ray-tracing. Within the competition time frame, I converted it to UE 5 and Lumen lighting system. I converted Unreal Marketplace Infiltrator Demo to UE 5 / Lumen prior to the competition. I re-created the animation with FX sequences, adjusted lighting, and environments, and replaced some assets with high-resolution Nanite assets within the competition time frame. The final urban city closeup shots were created for the competition using Marketplace Downtown, City Sample Buildings, Twinmotion assets, and Kitbsash 3D Neo Cities collection. To add a more Sci-Fi vibe, I textured, rigged, and animated a non-standard (Robot) character. All of these are combined with the World Partition / Data Layers system and created the animation camera sequences, which also triggered the Data Layers’ activation. Triggering “worlds” – four of them – from Sequencer is a new feature of UE 5. At the time, I could not find much documentation. I was not even sure if it would work, but I have managed to dial it in at the “11th hour”.

The Stori Line:
The once thriving Orchid Valley is out of this world. There is an underground mythical structure, which connects worlds.