Opinion on zooming in while aiming instead of looking down sights

So I have had an issue detailed here:

Moving camera just goes to my foot, no matter what values I put in Blueprint

Yes, I see what you mean. As mentioned, cameras are tricky - to expand, I don’t believe we can treat them like any other object with a transform because of it’s unique interaction with input and character. In any case, it’s still rather hard to determine the culprit from what you’ve shared, which is plenty, but of course testing things myself would obviously give me full control, this is time I don’t currently have to spend. Here are my guesses Main Camera Position: it looks like you are log…

I’ve spent around 25 hours (lowballing) trying to solve this issue but it doesn’t work no matter what. What I think i can do is something like what CSGO does, where when you aim (mostly) you don’t look down the sights, but your camera zooms in, It’s a Karlson style game I’m developing so it’d probably not be good, but I’d rather have it and have some aiming capabilities. What do you guys think? Do I put in and just fix it later on, or leave it if it’s not worth it? Or do I spend more time messing up my character code trying to fix this issue? I’ll take any opinions.

You know, I think that’s insightful. If I can’t get a feature working as smoothly as I want (or at all) and it’s taking up too much time, I bench it or try an alternative or work on something else and come back to it later. I say to myself “perhaps I’ll see what’s wrong after it has left my attention.”

If this is the last feature, well, that’s a bummer, but I think alternate ideas can surprise. Go with a work around that’s close, work on other parts of your game. If you decide to come back to this, you may have picked up a thing or two.

when you aim (mostly) you don’t look down the sights, but your camera zooms in,

I do have a question for you. Can you do it without the tick function? I already have a performance problem and if .2 FPS can be salvaged I would like to salvage it.

If you do not want animation, make it instant - then it’s just an event. If you want an animation, you must update the result every frame… You can always disable Tick and enable it only for the zoom. Or use a Timeline.

You can use the timeline if you don’t want to use tick.

Or use a Timeline. 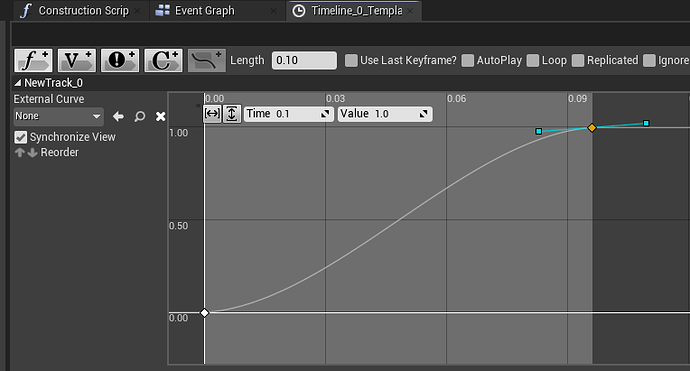 Ah so it can work fine with a timeline. Thank you Conrad and everynone

And also I definitely want animation. That’s why I’ve gone through this whole ordeal. I had aiming functionality without animation, by just setting the location of the gun, but I wanted animation. Then it all fell apart.