Opening a project from Launcher vs icon pinned to Windows Taskbar

Hello. Running a project from Epic Launcher, and running it from an icon pinned to the Windows Taskbar, makes the Editor save two separate versions of EditorPerProjectUserSettings.ini, which means different Favorite Levels, Recent Levels etc.

I would always (since 4.13) run a project once, set the editor to automatically open both the last opened project and, in that project, the last opened level. Then I would right click the Editor on the Windows Taskbar and pin it, which allowed me to then quickly launch the project from the Windows Taskbar. But sometimes, if it happened so that I had the Launcher opened, I would launch the project from the Launcher. Maybe I’m mistaken, but I believe this would always lead to the same EditorPerProject configuration. It seems after we moved to 4.25, there’s been this schism, where EditorPerProjectSettings are saved to two different .ini files depending on where I launch the project from. Is that intended, or a bug?

Good catch! Would you mind filing a report of that on the bug submission form and we can follow up on it from there?

If it is for any help, I have found Windows Taskbar editor opening always a bit clumsy, so I made tiny tool for that: https://forums.unrealengine.com/comm…ect-executable

I verified the issue after deleting the Saved and Intermediate folders in both locations. Since it still occurred, I’ve submitted a bug report.

Thank you Skylonxe, I’ll give your tool a try and pass it to the team!

I checked the tool and it’s working (thanks again!) so I passed the link to the team, and a colleague recommended another solution he’s using: 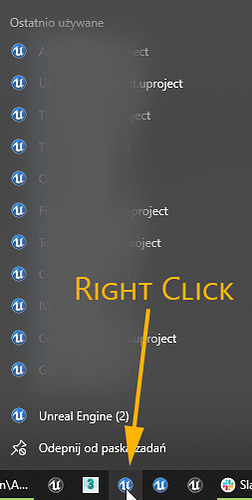