[OPEN SOURCE] Not Yet: Dialogue System

Hi, my team and I while working on our game WarriOrb has developed yet another Dialogue plugin, because we thought the current Dialogue plugins on the market did not fit our needs. So here we are today releasing this awesome (we hope so) Plugin to everyone who wants to use it.

Contribution, feedback and constructive criticism are appreciated and we would be really happy to hear about your game using our tool.
Should it prove useful to you, the best way to say thanks is to mention us and our game to your own audience. This honestly looks amazing. I am downloading the source now to compile it

This is amazing! thankyou!

A quick update, we just implemented a new feature that allows you to modify the runtime data of the Participant Actors that implement the IDlgDialogueParticipant interface. This is very useful if you want to test the Dialogues easily at runtime or just to cheat in your game ;).

Showcase video from the Example project: 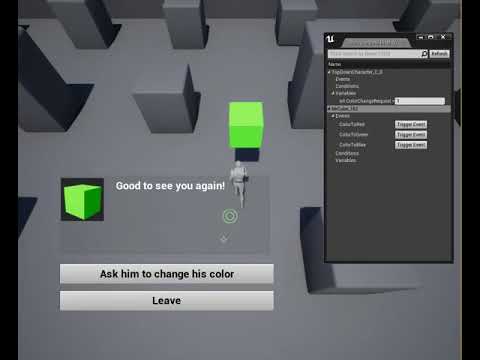 To open the runtime editor you just need run the console command Dlg.DlgDataDisplay.
OR
After running the game in the editor you can open the **DlgDataDisplay **window by going to: Window -> Dialogue Data Display

Before you can use the DlgDataDisplay Window you need to register the console commands of the Plugin. An example is provided in the project here.

In the showcase video above you can see that at runtime only two actors Implement the IDlgDialogueParticipant interface: *TopDownCharacter_C_0 *and MrCube_182.

The Character can talk with the cube to change the color of the cube, but every time a color is changed the int variable **ColorChangeRequest **is incremented (up to 4 times).
The Cube is changing the color by using some events: ColorToRed, ColorToGreen, ColorToBlue.
You can change the color of the cube by simply talking to it or by triggering the events in the **DlgDataDisplay **window.

This of course works in every project with any amount of actors that implement the **IDlgDialogueParticipant **interface properly, see the example project for a reference :).

Hi,
Quick update, you can also find the Plugin on the Marketplace

An Update regarding branches, we plan to remove the master branch and instead use branch names depending on the version of UE they support. (e.g. for UE 4.18 the branch name is 4.18).
The default branch would be the UE version we are using in our project at any time (it is 4.18 at the time of writing this post)

If you are using or plan to use the Plugin as a submodule in your project please update/add the git submodule with the branch name you want it to track.

NOTE: That some old branches are no longer maintained, please read the README for that branch first

Could you add a Typewriter effect? That would be really cool.

This looks like a decent project, since I am still tinkering to what extent dialogue will play a part in my game (maybe huge), planning to test it out.

This looks amazing! Is it possible to use this to call functions, such as opening a shop widget?

Could you add a Typewriter effect? That would be really cool.

The plugin does not have any UI logic (we considered the UI to be too game specific to include it).

This looks amazing! Is it possible to use this to call functions, such as opening a shop widget?

We have events for that. Your trader implements the interface, then you can call an event with e.g. name “OpenShop” on him/her/it.
In your trader code/blueprint you can implement the event handler function, and you can open the shop from there.

Is there any way to check which node you’re on (by like, number or something) and jump back to it later? Like if I was to make a visual novel, I’d want to save which node i’m on when I save, and when I load, I’d want to jump straight there after loading all my variables and stuff.

Unfortunately not yet, saving during dialogue is something we did not need.

It is rather easy to do (all I need to do is to write a getter function for a protected variable and a function which starts a context with a given node index), I am going to add that tomorrow.
You will be able to get the newest version from the gitlab repository right away. Unfortunately doing a marketplace update takes unpredictable time, I can’t really tell how long it will take to include this in that version as well.

Alright, thanks man, looking forward to it. Great plug-in btw, thanks for sharing it for free.

Any chance you guys could add a couple of things? I know some of these might be a pain to add because you’d probably have to redo your branches in your project but I think they would make the plug in a lot better.

Thanks for the list, all three sounds like a pretty good feature to have!
Request 3 wasn’t skipped because it was too hard - we simply did not have the need to add it. 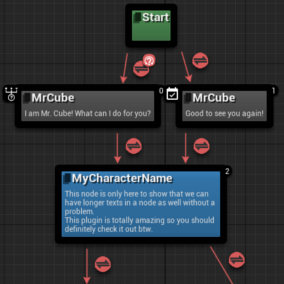 Unfortunately we have a few things going on which requires much of our attention, so I can’t really promise to do them in the near future (next few weeks).
I am sure we will get there eventually though.
Meanwhile both the issue tracker and the repository is public, and contributions are welcome.

Unfortunately it is not possible yet.
We have an opened issue about it:

In runtime you would not need to split the FText to find what to provide for it in the FText::Format() e.g. if a node has a text I'll...

We might implement it in the future, but I can’t promise anything at the moment

This is how I’m currently doing it in blueprints. So if you wanted to get the player’s name, it would look something like “Hello [Player:Name:First Name]”

I forgot to mention here, but now there are new event and condition types which work directly with UProperties. You can use them to set/get normal unreal float, bool, fname, and int variables, and compare them the way you do with the participant variables. It also works with auto-complete if you set up the blueprint class for the participants in the dialogue’s details panel.

I just implemented your third request, it is already in the public repository and it will be included in the next marketplace update.
I’ll try to take care of the rest in the near future as well.

Nice solution for the variables in text issue, thanks for sharing it.
As far as I know however it won’t support localization - because you convert the text to string. Unfortunately I can’t really think of any better solution at the moment - I will try to look into the C++ implementation of the FText::FormatText() node and see if we can integrate something similar into the dialogue editor.

About the new feature:

There is also a helper function ChooseChildBasedOnAllOptionIndex() which uses this new index type. I hope it isn’t too confusing.

Edges now have a bIncludeInAllOptionListIfUnsatisfied bool variable, which is true by default. Set this to false if you want to stop an edge from being included and accessible.