So I have a setup where my controllable pawn takes damage whenever it collides with anything. The problem though is that I’d like a blocking volume to stop my ship from going certain places but I don’t want it to take damage. Here’s a picture of the setup I currently have for it.

How would I get my ship to not take damage from colliding with the blocking volume?

You shouldn’t put take damage in the ship actor. You should put it in the actor the ship hits. Make a box" or whatever object to collide with" add a BP to it, inside bp add the on hit or overlap event with apply damage. Then in your ship add a apply damage event and pass in the damage amount and take away health or whatever. Now you will have to adjust your collision settings as far as pawn class or vehicle ext for both ship and blocking object.

It doesn’t matter too much where you put your damage stuff to be honest. It all depends what your trying to do. For something like this it might be easier to give objects tags to determine if they will damage the player. The tags of the touched actor can be checked before applying damage.

I would strongly prefer the damage to be inside of the ship actor. Because there are literally like 90 asteroids that spawn to shoot. It’s going to take me 90 times more work to go and add this into each one instead of just having it in my ship. Is there a way to have the blocking volume not damage my ship with this setup?

What you are trying to do exactly?

However, I still want my ship to take damage when colliding with anything else.

If you want to keep the damage in the ship then I would make the blocking volume and add a tag to it. Call it wall or something. Then drag a line from other component and type tag. You should get a get tag node or something similar “not at my pc right now”. Then branch that before the chain you have there. Don’t connect true to anything and connect false to your set health. So everything that doesn’t have the tag wall will cause damage. Try that see if it works.

Thanks DJ. That’s working. good idea! I appreciate the help! 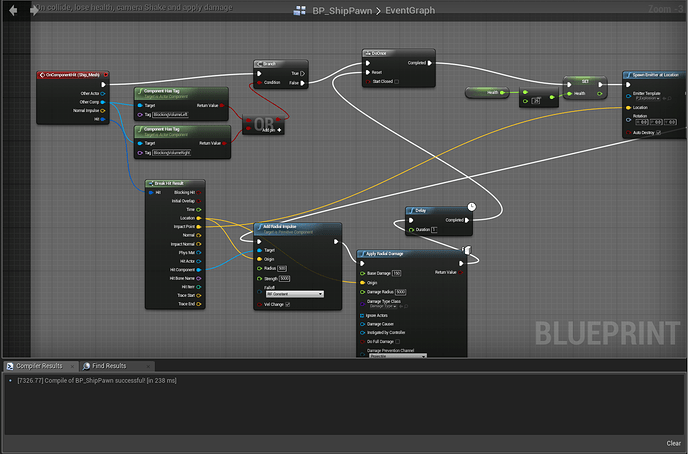