OnActorBeginOverlap seemingly not responding to overlap

Heres the situation:
I am trying to get an actor (BP class of C++ class based on Unreal’s ATriggerBox, called DamageBox) spawned with player input to execute a function on overlap.
DamageBox is set to only overlap with a specific “HitBox” object collision channel (see below).
When DamageBox overlaps with another ATriggerBox with the “HitBox” object collision channel, the function is not executed and my debugging log text (see below) does not appear in the Output Log.
Yes, I have Generate Overlap Events true on both actors.

Here are a few screenshots (Ignore the comments)
Snip of .cpp file of DamageBox: 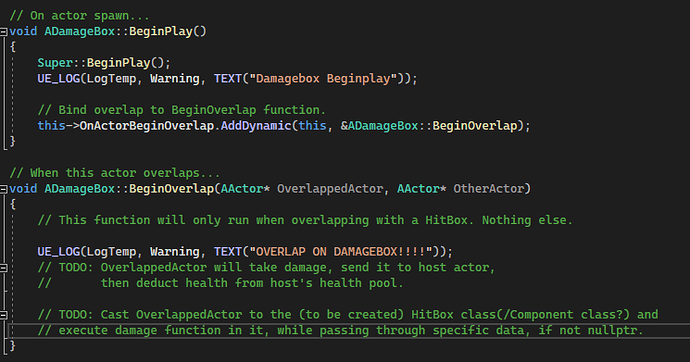 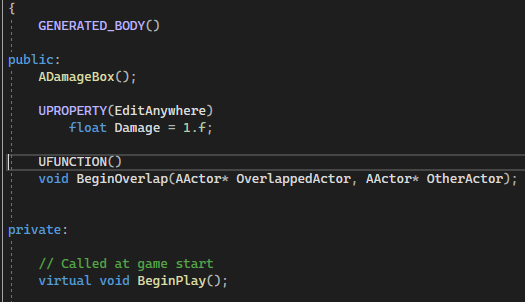 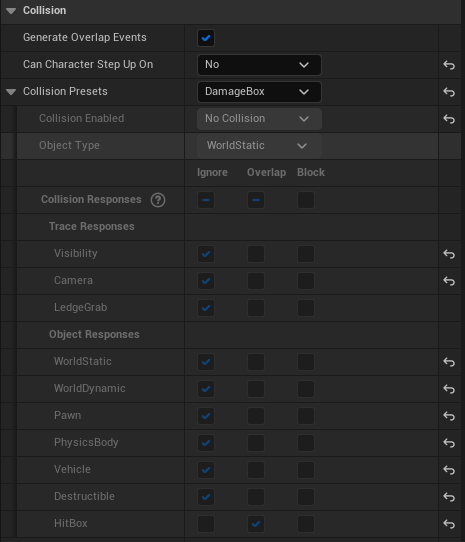 Do you think I should try to use OnComponentBeginOverlap on the Collision Component instead? If so, what exactly do I need to give AddDynamic?

I don’t quite understand Delegates, and the Unreal Docs are just outright confusing and leave a lot out, so I’m sorry if this is a stupid question.
If you know any potential solution, feel free to post it here, and if you need more information to help solve it feel free to ask. Thanks!

But you have No Collision set. Even if HitBox Overlap is checked, it’s ignored. Set it to Query instead of no collision and try again.

I just set Collision Enabled to Query Only -to no effect, but it was definitely a problem, thank you for pointing that out.

I’ve encountered a bug both in UE4 and UE5, where collision does not activate unless you change it to Query and Physics, and then you can maybe change it back to Query Only. But there were multiple cases when Query and Physics worked fine for overlaps, but Query Only did not, with the otherwise same setup. Try it, maybe?

Good idea, but no change.

Problem solved. The issue was in the collision settings, and them being jank-ily set up: TriggerBox 1 was filtering out TriggerBox 2 via TB2’s Object Type. If anyone in the future is having a similar issue try testing the ATriggerBox, or whatever trigger type with every Collision Response Object set to Overlap.