Palmer Lucky and John Carmack are visionaries, and Brendan Iribe has a great business sense. They certainly put a lot of brainpower into making a decision they felt was best for the future of VR.

I have no doubt about that but they dont have control anymore, Facebook might have a hands off approach but I dont think it will, I do really believe this is cornering an emerging market in terms of Ad space and nothing more for Facebook. Just think of what the Oculus does, it removes all external stimuli and focuses you, ofcoarse its going to be prime realestate for marketing guru’s and I can see an extremely Ad based future for VR until an independent comes along.

My hope is that this is just a bad taste April fools joke, one can hope.

If you hate ads go with Sony’s headset instead. If that one gets ads too than I will be truly upset.
And of course Facebook will force ads in, I am 100% sure. They know devs and gamers are already mad so they will be kind for a while, later down the road that is just what is going to be; Oh my god, Futurama was right.

Im not against Ads, sometimes theyre useful but ofcoarse Im against Push Ads and a trend on Android lately is the ability to turn Push Ads off once you run an application, AVG on Android will actually list a game as malware if its Ads are considered too invasive so its not like we are totally unaware of the rammifications of these types of platforms. As consumers I believe we should have choice and part of that choice is not to be blasted at every turn, this is exactly why Ad supported TV is on the downturn and computer gaming and premium content streaming services is up because the people have spoken time and time again when given adequate choice.

I was about to order an Oculus this morning actually but I held off and Im glad I did, I dont mind handing over my hard earned cash when I know where its going but at this point I dont see the same future for Oculus as I did before the sale

The thing I liked most about the Oculus was it didnt lock you into an eco-system, typically Sony does try to do that by making their products in a similar vein to Apple in that its considered a lifestyle choice.

Just wait for it guys.

SOA (Sword Art Online) was a warning to us all. They knew VR was coming. Facebook plan to put us in inescapable comas where we’ll spend the rest of our days watching 3d ads.

Facebook is really taking its name too literally. Ahahaha)) 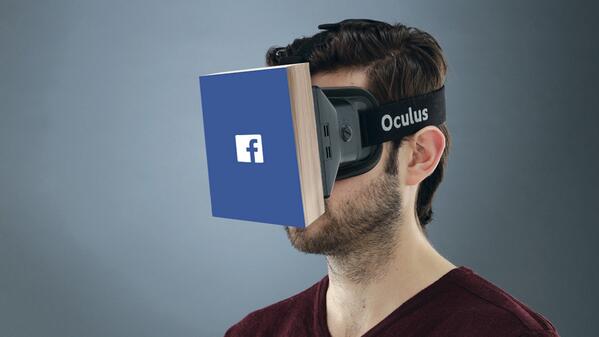 /\ kudos to the person who made that image. hahaha

I’m not particularly optimistic, and I believe this has the potential to be a massive setback for VR rather than an opportunity.

Oculus up until now was an essentially an agnostic piece of hardware that was open for development in a variety of applications. Facebook on the other hand I wouldn’t expect neutrality from as they love their closed platform setup. I’d be apprehensive about their intentions because historically they have never been on the side of the consumer, and I’m apprehensive about their capability as they have also never successfully bought into hardware either. As a platform for software developers, Facebook has provided a fairly toxic environment that I know I’d never want to be locked into - constantly pulling the rug from under developers.

Ultimately, Facebook have a plan for this product. As the platform holder they are unlikely to care for other developers - they’ll be developing a platform to cater to their market and you’re competition, it’s not in their interests to support you or make your life easier.

Or to quote someone on GameDev.net:

When I worked on gambling machines, this was one of the reasons why we never founded our own Casino. If we created the machines and also operated a venue, we’d be competing with the other operators, and they’d no longer trust us enough to buy our hardware.

Like everyone else said, Not having high hopes for this anymore. However they might suprise us this time. Let’s hope for the best because it will be really sad if facebook messes up “again” because yes I don’t feel comfortable with facebook having oculus either for a bunch of reasons including personal info handling etc.

I’m really disappointed with this. I was almost there to order and use it in a small project. I don’t feel comfortable with Facebook buying everything is successful.

Maybe it is not completely rational… but this really bother me.

I wont go long into what I have too say otherwise I will be here for days. I like the idea that facebook wants to fund a small group of developers who do not have the funding too compete against microsoft and sony. Facebook is just taking them under their wing too help a small group out.

Well Oculus is just a display right? So same as Micrisoft could not hold Kinect for themselfs, same Facebook wont hold Oculus

It’s not the same thing–The Kinect technology was licensed from Primesense, Microsoft didn’t own the technology. For the Kinect 2.0 that they released with the Xbox One they used a different technique. Apple bought Primesense so they own that technology and can license it how they feel but it doesn’t matter to Microsoft anymore because they don’t use it.
For Oculus, Facebook now owns them completely and can choose what they want to do with it. Other companies can use similar techniques though for VR, like what Sony is doing with their headset. The deal though is that Sony isn’t likely to make their headset work with other platforms. I think if Microsoft makes a headset for the Xbox One then it will likely have Windows support as well. And realistically with any of these headsets I would imagine that it wouldn’t be impossible for some people to add drivers on their own if the company doesn’t do it themselves.

I picked The New York Times up this morning and I read this:

Brendan Iribe, a co-founder and the chief executive of Oculus VR, said Facebook would be able to use the technology to allow avatars representing its members to interact with one another — perhaps by socializing at online parties.

According to a person involved in the deal who was not allowed to speak publicly because he was not authorized by either company, Facebook eventually plans to redesign the Oculus hardware and rebrand it with a Facebook interface and logo.

I think that Facebook wants to be a little more directly involved than the Oculus team is letting on.

Link to the article.

Check out this podcast by Facebook talking about the potential of this acquisition
http://www.shareholder.com/visitors/event/build3/stage/stage.cfm?mediaid=63723&mediauserid=0

Kotaku - Oculus addresses some of the Internets biggest concerns