Anyone seen a good tutorial about how to import a destructible mesh from PhysX Lab into UE4?

I’m not familiar with any tutorial specifically, but it’s not that complicated.

In PhysX Labs when you are done setting up your DM you will need to go File > Export asset. This will save the file as a .APB file.

That’s all there really is to it.

If you have any trouble let me know and I’ll gladly help.

And then to set it up, is that the same as you would with a normal Dest. Mesh?

Working Fine. Love it to be precise. Issue now is the exploding force.

Do I edit this in Nvidia or in UE4? 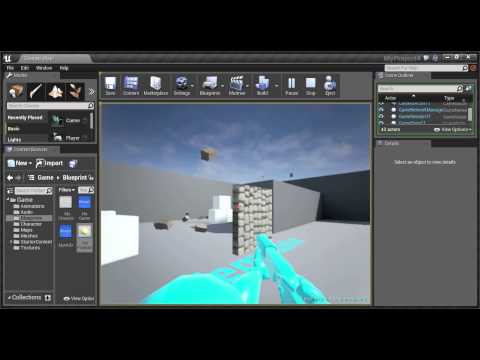 And then to set it up, is that the same as you would with a normal Dest. Mesh?

You can set it up via PhysXLabs just as well as setting it up in UE4. In PhysXLabs you will have an abundance of features that are not included with UE4 though, like depth layers for instance. In UE4 you only have access to Voronoi Fracture and 1 depth layer. In PhysXLabs you have access to more depth layers (5 I think, not sure I’ve not had to use that many before) along with slicing your fracture and using masks to cut your fracture just the way you’d like.

The main settings though are the same, there is some slight naming differences on a couple of them but nothing that shouldn’t be easy enough to figure out once you’re familiar with the program.

Issue now is the exploding force. Do I edit this in Nvidia or in UE4?

Either. Using the yellow ball projectile you’re going to notice more pushing force since a mesh that is colliding is pushing those pieces in those directions compared to using a line trace and applying a radial damage and impulse.

I don’t have the editor open in front of me to double check but off the top of my head if you want to break chunks away from the mesh you’ll want to set some of the following up.

I think that’ll get you started with being able to shoot and break chunks off without having the whole thing destroyed at once and shooting in every direction. I can confirm tomorrow when I have the editor in front of me if you’re still having trouble.

I will say though, you will not have as much control over the destruction by using the ball projectile.

I plan on using a catapult. So got to be a sphere, or just the sphere that comes standard?

Has it any thing to do with the “Mass” Bug at the moment, as adding mass seems to have no effect.