I think I am close to the solution (maybe with two different approaches).

**What’s it all about: **
I am working on a (VR) music experience, partly interactive, partly scripted.

For this I have an NPC in my level, which is a human with wings in a socket on his back within the Character Blueprint.
The NPC shall appear in different moments in the level in different poses.

For example: I added a boolean variable called “Sit Down” and as soon as I set it as default value within the Animation BP the NPC sits down as soon as the level start.

Before that I had tried to add variables within the Character BP for the same purpose.
But how I could use them to trigger the poses in the State Machine?
I can’t find any way to do that.
May I misunderstood the principles of the structure?
Do I maybe have to create an additional Pawn to be able to control the NPC from another BP?

In the end result I’d like to be able 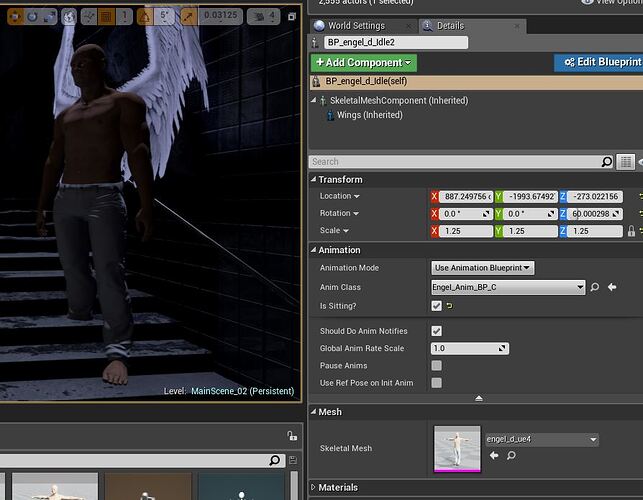 Hi Lioki,
you are right for sure

Here is my current BP - nothing besides some trials to rotate the legs for more control in specific poses in specific places within the level.

My problem is that I can’t figure out how to do what you say.
All examples show a pawn but I only have the character BP because I thought that I don’t need one for an NPC as the movement does not rely on key-controls etc.

You need to drive the variables in your Animation BP somehow. You would, for example, have another Pawn BP that holds the logic for the NPC character, you would cast to that BP inside the animation BP. It works much the same way as the tutorial I linked to you.
Please keep in mind I don’t have the greatest knowledge on these things but I am trying to learn. So we could end up in a cycle of the blind leading the blind lol!

Well, two are better than one, blind or not

Thank you so far, It’s time to experiment a bit!

I finally got it.
I had messed up the Character BP originally by deleting the capsule etc. (don’t ask me why

I build it up from scratch again and was able to grab the variable lying in the Character BP from within the Animation BP.
So I could trigger the states within the State Machine and start the level with a default sitting pose. Now it#s just about adding IK for the feet to prevent them from landing inside the stairs

Thanks Lioki, you helped me to get on the right track!