Hi. Currently I am learning AI part of UE. I am using Dynamic Combat System, where I have one Example Character and one TreningDummy. I am trying to implement the responsiveness/reaction for NPC (like defence himself, attack or run away), only when main actor punch him or simply pulls out a weapon in front of him? Well, it was reccomented to me to create an event that adds the player character to the enemy list in the behavior component, each time when the actor will attack NPC. But this task seems to be difficalt for me

Maybe, someone have already implement such behaviour and can tell me which steps should I do to perform this task.
Thanks in advance.

image957×326 38.8 KB
After that you need to add a stimulus source inside of the AI perception as damage sensing. What’s nice is you can get the actor location and the hit location (maybe if you want police to show up at the scene of the crime) by right clicking the stimulus and clicking break structure pin. So if you want the npc to chase after getting damaged, you can store the actor and his location in the blackboard and call those variables in tasks during your behavior tree. Make sure when having the player damage someone that you use “apply damage” to hurt them. Also you need to add a stimulus source component to the player and add damage source. If I have time tomorrow I may make an example if you still need it. Hope this helps.
Dimajio333 September 20, 2021, 9:40am #3

Thanks a lot for this explanations. I will try to follow all this steps. If you have time tomorrow, I will really appreciate some examples. Thanks again! 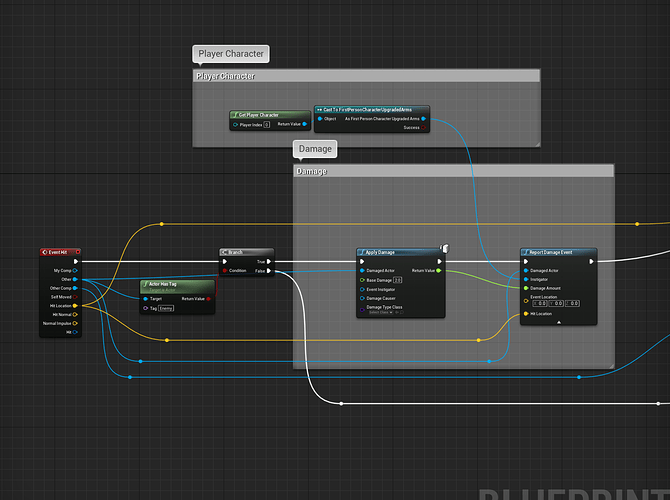 ApplyDamageProjectileReport Damage1524×1136 151 KB
Here is the projectile setup I have in my current game I’m making. I apply damage and report a damage event with the instigator being the player character (his projectile). How you would do this is on the punch having a collision box where the collision component only overlaps when the punch action is active (stops you from accidentally overlapping). I added in the tag on my game in case the hit happens on an ally character it won’t hurt them. Another nice aspect of event hit is you can spawn an effect with the hit location, so if the punch has a shockwave you can spawn that niagara effect on hit.

PlayerCharacterCausingStimuli2737×290 52.9 KB
Next you need to make the player character have a stimuli source like the image above.

EnemyCharacterUsingEventAnyDamage1488×584 91.6 KB
Here we have the enemy character, damage his health float with the event any damage function. My branch here eventually plays a death animation on health reaching zero.

EnemyControllerWithDamageConfigAdded1138×307 32.1 KB
Make sure you add the AI damage sense config to the AI controller too. This tells the AI to look for perception updates when a damage event is reported. 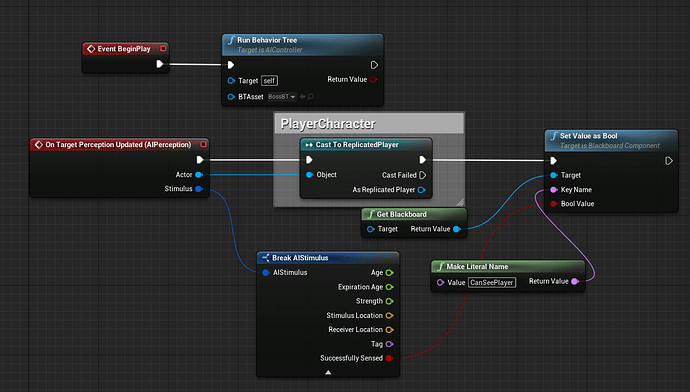 EnemyControllerMakingPlayerVisibleWhenSensed1424×810 168 KB
Inside the event graph of the enemy AI controller now all you have to do is have its perception update to stimuli from the player character (the one punching in your case). Setup a CanSeePlayer boolean in the blackboard and then store this value from the stimulus. 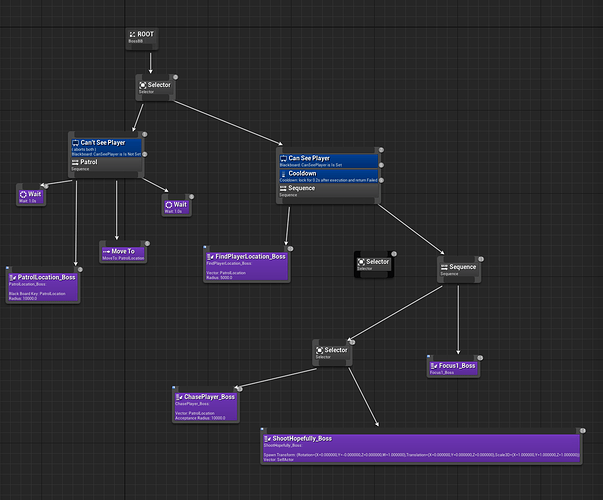 EnemyBehaviorTree1394×1154 134 KB
In this example enemy when the AI can’t sense the player it will randomly patrol around. When it can see the player (in my case this is set true from hearing, seeing, and damage occurring) it will store the vector location of the player, move towards him, focus and shoot at him. Hope this helps.
1 Like
Dimajio333 September 20, 2021, 2:38pm #5

Wow, great, many thanks for this!! It’s really helpfull