Not sure if my Build is working, won't install into phone

So I am successfully getting the project built - it has LITERALLY nothing in it (following the tutorial on the Unreal docs site) just the floor and basic lighting - but it takes about 5-7 minutes to package it? It doesn’t even have a Gig’s worth of data, completely fresh scene. This seems like a bit too long? Something seems wrong…

I followed the tutorial to a T - apart from installing the Nvidia Codeworks for Android and Visual Studio - that was a nightmare! It has to be a specific version of Visual Studio or Codeworks won’t play nice. I eventually found VS v.2010, I hope that this isn’t the reason I’m having issues. So it builds okay, but when I hit the BAT file to install it on my android phone, it doesn’t work. There are a number of errors popping up.

I am a complete n00b at this - literally the first time I’ve even attempted to package anything in Unreal4, nevermind for android. Could someone please point me in the right direction for troubleshooting? All tutorials I look at have a degree of “You should know This much so I’ll skip a step or 8” I literally know nothing. I don’t know if the files need to be on the phone, where they should be. I’m at an absolute loss.

Help, please! Anything is greatly appreciated!

Maybe this can help you.

They disappear before I can screencap them. These are notable though - [DELETE_FAILED_INTERNAL_ERROR] and [INSTALL_FAILED_NO_MATCHING_ABIS]. There are also lines indicating that there are, permission problems or storage issues - I enabled USB Debugging, and “Always from this computer”, checked in the dos box as per the walkthrough and everything seems fine. Phone is definitely connected. There’s plenty of internal storage and I have a 32gb SD card.

The phone is a Sony Xperia Z1 Compact, it supports VR and google cardboard. Am I missing something really simple here?

Okey i understand problem. Your computer does not see the phone in debug mode. This this helpful. If debug mode open then you need install android driver. Tried to launch the game onto my phone (Took it about 20 minutes to load over 2000 shaders - this is a totally blank project with no starter content…it’s beyond me.) This is the error dialogue I got. 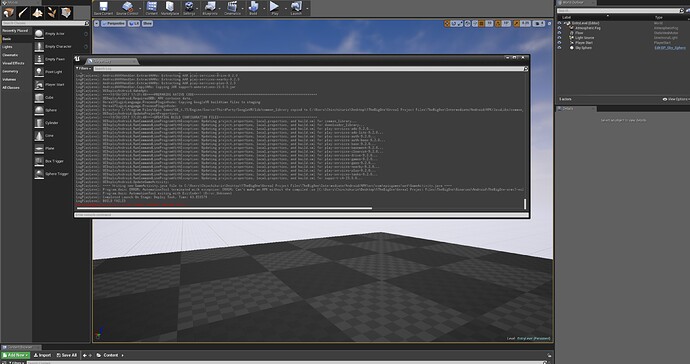 I know that my phone is Android version 5.1.1 and it has an 800 chipset. This is what happened when I changed from arm64 to armv7.

I am currently uninstalling Codeworks and Visual Studio 2010 to see if I can re-install and solve some issues. I also tried to update my phone drivers, but they are up-to-date.

The only remaining option is updating all of them.

Worst comes to worst, I’m meeting my Lecturer soon so hopefully, he will be able to help me. Thank you for lending me some of your time - I will update and let you know if it gets solved.