Hello, I’ve been working on a replicated FPS and I’ve ran into a little problem, my current setup looks like this.
First person weapon & first person mesh - only owner see
Third person weapon & tp mesh - owner no see
I also have two UParticleSystems I’m using for fire fx on both weapons, but i cannot find a method that achieves the same outcome as OwnerNoSee for particle systems, to hide the third person fire effects from the owning player.
Any help much appreciated, thank you.

@Alex37009 You are not forced to use OwnerNoSee. It’s there as an option. There is no “one good solution” as this is more like a design question. Probably that’s why this got no answers before.

Instead of using OnwerNoSee everywhere, you could disable the whole chain of “third person objects” or whatever that you don’t want the local player to see. You can check if this player is the local player before spawning the effect, etc. The best solution would be to completely separate what code runs for local players, and what runs for remote players.

Thanks for your answer STRiFE.x

I have one C++ file for FP weapon an another for TP weapon and it’s the character file who
activates the fire function in FP weapon and TP weapon.
So the for the FP weapon i use Only owner see and i play the effect with no replication.

I have tried to make a BP with only the system and call spawn actor from the TP weapon so i have acces to Owner no see but it’s not working.
I do not know how to do that. 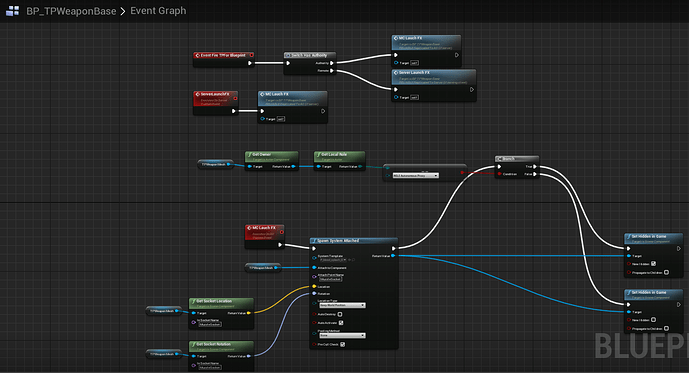 Hey Alex37009 , Before I put this problem aside and I went to the next step of my project then I came back and I found it Be strong, keep the faith you will get there my friend