If I follow the “Creating 3D Widgets” tutorial in the docs to the letter, I get these results;

I have found various suggestions, such as changing collision channels, setting the widget blueprint’s pivot to 0,0 and enabling click+hover events on the player controller, but my UI is little more than a static image of itself.

Everything is set up like described in the docs. Additionally, I now call this Blueprint function from BeginPlay() 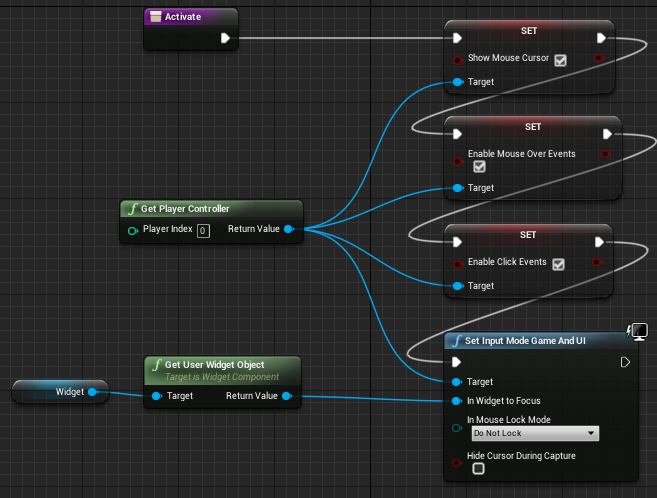 Interaction distance is sufficient (and in 4.12.5 it worked – at least in the editor).

The OnHover/OnUnhover/OnClick events simply don’t fire anymore since 4.13.1. What could be wrong?

Attaching a “Widget Interaction” component to my menu camera and changing its interaction mode from “World” to “Mouse” at least got hover events working again.

Though I wonder if the “Mouse” setting breaks VR controller input (since the controller would be an object with an orientation within the world).

If anyone wants to take a look, I uploaded an example project here: https://ufile.io/95442

EDIT: Nevermind, I probably just have to forward mouse button events manually from my player controller to the widget interaction component.

i was just going though the same thing here is some video tutorials that could help 4.13/4.14 Widget Interaction Component - YouTube